The Gospel in Every Sign Language: Passion Raises $450K for Deaf Bible Translations

Christians in 16 countries will finally get their own versions of New Testament stories.
Kate Shellnutt| January 4, 2019 02:51 PM 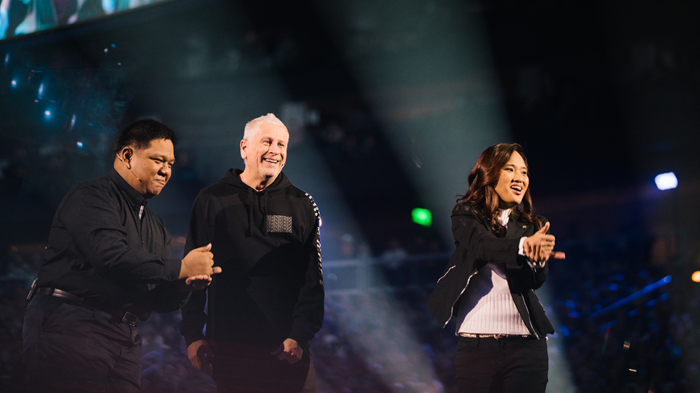 An estimated 160,000 people will be able to experience New Testament stories in their own sign languages for the first time thanks to this week’s Passion Conference, which raised nearly a half-million dollars for Bible translations for the deaf.

Though there are hundreds of sign languages, none have a full Bible translation, and just 2 percent of deaf people around the world have access to the Gospels in their sign languages, which is crucial for deeper understanding of Scripture, according to the Deaf Bible Society.

In recent years, Louie Giglio’s popular student conference has raised millions for justice causes, but this was its first year urging participants to back sign language Bible translations.

The event, held in Atlanta, Dallas, and Washington, DC, featured from the main stage a 21-year-old who leads Bible studies for the deaf in her community in the Philippines. She prayed in sign language and appeared with an interpreter.

“I’m partially deaf and wear a hearing aid in my left ear. So to hear that the #Passion2019 mission this year is to help reach deaf community, I cried,” tweeted one attendee.

Sign languages, with an estimated 400 different versions used around the world, have been considered the final frontier for Bible translation, according to Wycliffe Bible Translators. American Sign Language is the only one that has a full New Testament translation.

Because sign languages aren’t structured like text-based or spoken languages, they require their own processes for passages of Scripture to be told visually through sign. Chronological Bible Translation (CBT) translates the Bible by stories, while Book-by-Book (BBB) translation uses the chapter and verse structure, the Deaf Bible Society explained.

The $448,000 in donations from Passion attendees will go toward its Hope in Every Language translation campaign.

Once they’ve gone through the process of scriptural exegesis, consultation, and review, sign language translations are typically recorded on video so that the deaf can watch, learn, and share the stories in their communities. (YouTube has helped ministries reach the deaf with specialized visual resources for children’s education, Bible study, sermon translation, and more.)

For decades, translators in Japan have made progress translating the Bible into Japanese Sign Language (JSL). In 2013, CT reported that the country may one day become the first to finalize a complete Bible translation.

Over 30 years in Japan, Mark Penner shifted his role from being a church planter among the deaf to organizing translation efforts as part of Japanese Sign Language and Thai Sign Language projects supported by Wycliffe. When deaf Christians in Japan relied only on written text, they struggled to interpret the gospel message throughout Scripture, he said.

“And you can’t really dig down and get a deep understanding of the love of God, the grace, the truth. There are just so many things about God that you can’t really grasp because it’s not in your language.”

In its Silent Minority campaign, a 2017 initiative to bring more translations to the world’s 70 million people who are deaf, Wycliffe described how sign languages often structure stories around visual setups—like opening the story of Jesus feeding the 5,000 (Mark 6:30–44) with the detail about how many men and their families were there, which doesn’t come until the final line in the written text.

“My goal for the Scripture translation is to spread the Good News so that Deaf people don’t have to rely on the written word but can have it in their heart language,” said Pastraporn Sarakong, leader of Wycliffe’s Chronological Bible Translation team in Thailand.

Ira, the young Filipina leader who attended Passion in Atlanta, launched a Bible study using the 10 stories that have been translated into Filipino Sign Language so far. Such translations make it easier for Christians to not only understand scriptural lessons for themselves but also to share them with fellow members of the deaf community.

These stories help deaf Christians grow in their own faith, remain connected to their churches, and internalize the gospel message.

“Today was a win for Deaf people all around the world as we raise awareness for the need for sign language Bibles,” the Deaf Bible Society posted on Facebook. “Thank you Louie Giglio for shedding light on this movement!”

Passion students previously raised nearly a quarter-million dollars for a Bible translation project in 2011. Two years ago, conference attendees sponsored 7,000 children, including every Compassion child available in four countries, in the largest donor surge in the ministry’s history.

The Gospel in Every Sign Language: Passion Raises $450K for Deaf Bible Translations