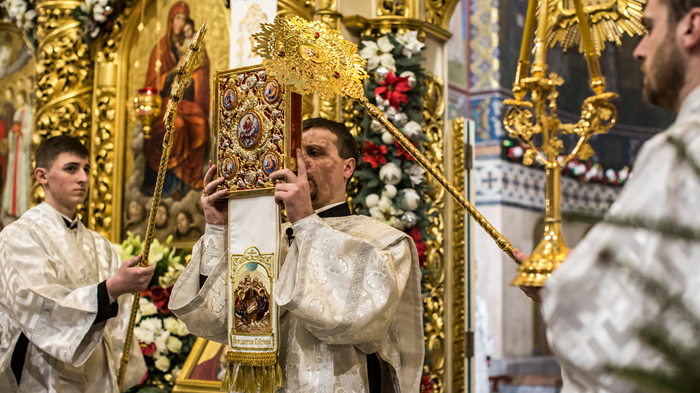 The Orthodox Church of Ukraine has been born again.

To understand the significance of the biggest Christian schism since the Protestant Reformation, unfolding since last fall and formalized this weekend as Eastern churches celebrated Christmas Eve, a brief history is in order.

Founded in Kiev in 988 A.D., Vladimir the Great accepted Christianity on behalf of the Rus peoples, who would eventually constitute the nations of Russia, Belorussia, and Ukraine.

Tradition holds that the formerly pagan Vladimir wished to give a religion to his realm, and queried representatives of Judaism, Islam, and the different rites of Christianity.

Astounded by the majesty of the Byzantine mass, Vladimir chose Constantinople. In 1054, the Great Schism split Christianity—and the Rus remained in the Eastern Orthodox world.

Geopolitical winds shifted, however, and in 1686 the Patriarch of Constantinople—considered within Orthodox leadership to be the first among equals—placed the patriarchate of Kiev under the ascendant patriarchal church of Moscow.

In the modern era, geopolitical and religious winds continued to blow. In 1991, Ukraine became an independent nation. The following year, a breakaway bishop (or metropolitan, in Orthodox parlance) established an independent Ukrainian Orthodox church based again in Kiev, joining a smaller Orthodox schism from 1990 in staunch opposition to the canonical Moscow-affiliated church. Neither group was recognized by the patriarchs of Moscow or Constantinople.

In 2014, Russia annexed the Ukrainian territory of Crimea, and pro-Russian separatists (with reported Russian backing) occupied two Ukrainian territories on the eastern border. The conflict has resulted in more than 10,000 Ukrainian deaths, with 2.5 million people displaced.

And in April 2018, the president of Ukraine flew to Constantinople (now Turkey’s Istanbul), to ask Patriarch Bartholomew for a tomos of autocephaly.

Tomos means document, and autocephaly is the status of an independent canonical church in the Eastern Orthodox tradition. There are currently 14, including Russia, Greece, Poland, and Jerusalem.

“Autocephaly is part of our pro-European and pro-Ukrainian state strategy,” said Ukrainian President Petro Poroshenko, who also described it as “a matter of our independence and our national security.”

Patriarch Kirill is also closely connected to politics, calling Russian President Vladimir Putin “a miracle of God.” In 2016, Putin erected a statue of Vladimir the Great, the historic prince of Kiev, at the Kremlin, indicating Russia as his true heir.

Bartholomew ruled on the side of Ukraine. On October 11, he formally revoked the 1686 document, saying that circumstances had changed.

On October 15, Moscow cut ties with Constantinople, severing the world’s largest Orthodox church from its historic home. Russia accounts for roughly half of Orthodoxy’s 300 million believers; Constantinople, only 3,000.

Bartholomew asked the three Orthodox entities in Ukraine—the Moscow-affiliated patriarchate and the two schismatic Ukrainian bodies—to dissolve. On December 15, they would gather for a unity synod to create one new church, electing their own autocephalous patriarch.

All but 2 of the 90 Moscow bishops boycotted, and the new Ukrainian patriarch, Epiphanius, prayed to “complete the unification of Ukrainian Orthodoxy, for an end to the war, and for a just peace in Ukraine.”

Bartholomew then invited him to Constantinople to receive the tomos of autocephaly on January 6—uniting one church while dividing another.

“[Ukrainians can now enjoy] the sacred gift of emancipation, independence, and self-governance,” Bartholomew said, “becoming free from every external reliance and intervention.”

To date, the other autocephalous churches have neither recognized the new status of Ukraine nor followed Russia in schism from Constantinople.

But Kirill sent Bartholomew an open letter, translated by a bishop of the Russian Orthodox Church Outside Russia (ROCOR), warning of dire consequences.

“You forever will lose the possibility of serving the unity of God’s holy churches, [and] will cease to be first in the Orthodox world,” wrote the Moscow patriarch.

“The sufferings you cause to the Orthodox Ukrainians will follow you to the Last Judgment of our Lord.”

The extent of their suffering is not clear.

Polls cited by Cyril Hovorun, a theologian and head of a Ukrainian monastery who has previously served with both the Ukrainian Orthodox Church’s external relations department and the Moscow Patriarchate’s education ministry, indicate 75-80 percent of Ukrainians are Orthodox; 56 percent of these identify with the formerly schismatic patriarchate in Kiev, while 16 percent identify with Moscow; 19 percent say they are simply Orthodox.

Evangelicals comprise only 2.2 percent of Ukraine’s population, though an additional 7.7 percent say they are “simply Christian,” taken by some as a marker of Protestant influence.

Andrey Shirin, who moved to the United States from Russia more than 25 years ago and currently works as an associate professor of divinity at the John Leland Center for Theological Studies, said that traditionally, neither Russian nor Ukrainian evangelicals take sides in inter-Orthodox conflicts.

This is true for Vitaly Vlasenko, ambassador-at-large for the Russian Evangelical Alliance, who nonetheless has sympathies for the Ukrainian Orthodox.

“It is their church and their responsibility,” he said. “The best thing for us at this difficult moment is just to stay in prayer.”

But their evangelical neighbors are on board with autocephaly.

“We are Ukrainians, and we want a normal church, not one based in the enemy’s capital,” said Jaroslaw Lukasik, director of Eastern Europe Reformation–Ukraine.

“Evangelical leaders support this action because of their patriotic feelings.”

But Alexander Webster, a senior ROCOR archpriest and dean of Holy Trinity Orthodox Seminary in upstate New York, is horrified.

“Ukraine is the ancestral home of all the Rus peoples. This unnecessary crisis is tantamount to a ‘home invasion’ by the Ecumenical Patriarch of Constantinople,” he said.

Webster explained that the 1686 document used the words “henceforth and forevermore,” in reference to Moscow’s jurisdiction. And ancient canons of the church forbid one patriarch from interfering in the territory of another, let alone reversing local excommunications or laicization of clergy.

The penalty, he said, is excommunication itself. This is what warrants Patriarch Kirill’s decision to break ties with Bartholomew.

“Patriarch Bartholomew is acting as a virtual pope,” Webster said. “We have to hope that God’s providence will steer us to the right solution.”

But so far it has been politics interfering with religion, and Webster, a retired US army chaplain, chides the US government in particular: the State Department, its ambassador to Ukraine, and its ambassador for religious freedom have all endorsed Ukrainian autocephaly—even citing the Orthodox theological term.

In subsequent developments, Ukraine’s parliament passed a law requiring the local Moscow church to rename itself to identify as Russian.

This law is currently appealed to Ukraine’s Constitutional Court, though the Russian Orthodox Church in Ukraine would retain its civil status and remain free in worship. But some reports cite security pressure on its priests to support or transfer into the newly independent Ukrainian body.

Already there has been violence, as one church erupted into a brawl when the parish priest opposed his bishop and sought to affiliate with the new entity.

Some fear outbreak of a religious civil war, with regional implications.

“Should illegal activities occur,” warned a Russian government spokesperson, “Russia will defend the interests of the Orthodox.”

Igor Bandura, senior vice president of the Baptist Union of Ukraine, said he has “double feelings” about the political interference on both sides.

“In normal situations, we would be against government interference in religious life,” he said. “But in light of Russian aggression, using the Russian Orthodox Church for their political goals, the [Ukrainian] government must take steps to protect the nation.”

Evangelicals in Ukraine enjoy an “unprecedented” level of freedom, Bandura stated. But in the occupied territories bordering Russia, evangelicals have not been allowed to re-register their churches.

This prevents the gas and electricity needed to heat meetings during the cold winter, contributing to a situation he describes as persecution.

Over the past two decades, evangelicals joined the three Orthodox church leaders and other religious leaders in the All Ukraine Council of Churches and Religious Organizations, buttressing relations. They received assurances that in the case of autocephaly, the newly formed Ukrainian church would not act as the Orthodox in Russia and support the rollback of minority freedom.

But Bandura expressed concern that perhaps this freedom was related to divisions in the Orthodox church, and the secular policy enacted by the government.

“Some Orthodox leaders now speak of a new state church that will be the spiritual foundation of the nation,” he said.

“We don’t like this. All together, we can be a spiritual foundation.”

Currently the task of forming it falls on Orthodox leaders, who Shirin says are in a very difficult position. They are entwined in national loyalties, geopolitical ambitions, local cultures, and spiritual responsibilities.

“I hope Ukrainians will work diligently to restore peace and unity in the Eastern Orthodox family, no matter what side they end up with,” Shirin said.