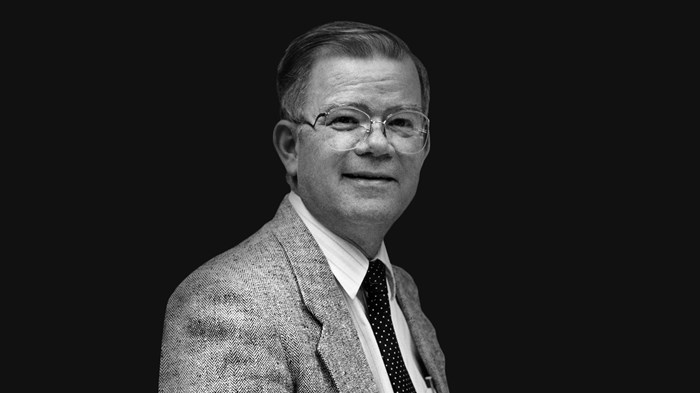 Phillip E. Johnson, a law professor who helped launch the modern intelligent design movement, has died at home in Berkeley, California. He was age 79.

Johnson’s landmark book, Darwin on Trial, argued that Darwinian evolution didn’t have real evidence or good arguments, but was instead “another kind of fundamentalism.” When it was published in 1991, Darwin on Trial galvanized a group of Christians who opposed the theory of evolution, but also wanted to distance themselves from Bible-based creationism, which could not be taught in public schools.

“It was necessary to put aside all questions of biblical interpretation or veracity and to concentrate entirely on the claims of Darwinism,” Johnson wrote for Christianity Today in 1994. “What was needed was to press questions that are legitimated within the context of mainstream academic thinking, questions about what has been proved about evolution and what has merely been assumed.”

The focus on debating the evidence for Darwinism made Johnson the “chief architect and guiding light” of the intelligent design movement, according to William A. Dembski, who was a senior fellow at the Discovery Institute until 2016.

“Phil helped us focus on the right questions,” said John Bloom, professor of physics and the director of the science and religion program at Biola University. “Whatever the details, was God involved in creation or did mindless particles come together to make us? What conclusion does the actual evidence support? Sometimes we don’t see the forest for the trees: Phil reminded me to focus on the big picture.”

Johnson wasn’t always interested in the “big picture,” though. He grew up in Aurora, Illinois, and was, by his own account, a bit obnoxious and too smart for his own good. He went to Harvard University at 17, but was disengaged and mostly aimless.

After Harvard he went to law school at the University of Chicago, but only because his father submitted his application, and he didn’t have a better idea. When he graduated, he got a coveted position as a clerk for Roger Traynor, chief justice of the California Supreme Court, and then as clerk for Earl Warren, chief justice at the US Supreme Court. From there, he went to the University of California Berkeley School of Law in 1967.

Johnson was an agnostic who admired the faith of C. S. Lewis, J. R. R. Tolkien, and Fyodor Dostoyevsky. Johnson was introduced to a contemporary Christian faith, however, when his daughter attended a Vacation Bible School. He was moved by what he saw her learn and started attending and eventually joined the First Presbyterian Church of Berkeley at 38.

Johnson didn’t start thinking about the question of evolution until he was on sabbatical in England in 1987. At 47, he was starting to feel like he was wasting his life teaching law. "I'd like to have an insight that is worthwhile,” he told his wife, “and not just be an academic who writes papers and spins words.”

Then he came across a new book in a London bookshop: The Blind Watchmaker, by the atheist Richard Dawkins. As he started to read, Johnson felt a stab of recognition. Dawkins was using the same rhetorical tricks that clever lawyers use when they have to defend a flawed case in court.

“What first drew my attention to the question,” Johnson wrote, “was the way the rules of argument seemed to be structured to make it impossible to question whether what we are being told about evolution is really true.”

Johnson started researching the arguments for evolution, and writing what would become Darwin on Trial. The first draft was 88 single-spaced pages and didn’t immediately impress anyone. Dembski only glanced at it, because he assumed a lawyer wouldn’t have anything interesting to say about evolution. Historian Edward Larson thought it was fairly pedestrian, though it articulated some old arguments with a new clarity.

Johnson took those criticisms, made revisions, and pushed forward, publishing the book in 1991. It quickly became a bestseller among evangelicals and also grabbed the attention of conservative Protestants and Catholics and renewed interested in the arguments for intelligent design. After Johnson organized a conference on the subject in 1992 and established an online listserv to continue the conversation, he was firmly established at the center of this new movement.

The book was popular enough to receive serious criticism. One evolutionary biologist said Darwin on Trial was “worse than most of the garden variety creationist tracts.” Stephen Jay Gould, a paleontologist and popular science writer, called it “a very bad book ... full of errors, badly argued, based on false criteria, and abysmally written.”

A few states started requiring schools to teach the intelligent design in the late 1990s and early 2000s, until a federal court ruled it was unconstitutional. In 2001, Johnson helped Republican Senator Rick Santorum craft an amendment to an education funding bill that would instruct all public schools to “teach the controversy.” The languge did not make it into the final version of the bill.

Johnson continued making arguments and writing books raising questions about the evidence for evolution, though.

In 2011, celebrating the 20th anniversary of the publication of Darwin on Trial, Johnson said he remained hopeful that intelligent design would eventually win the day.

“If we keep explaining the truth,” he said, “and adopting ever more creative ways of getting that truth across, as we are doing constantly, eventually more and more people come to see it and to understand it.”