While most Christian radio stations still wait until after Thanksgiving, Spotify proves that most listeners are busting out their jingle bells earlier than that.
Megan Fowler|November 20, 2019 08:00 AM 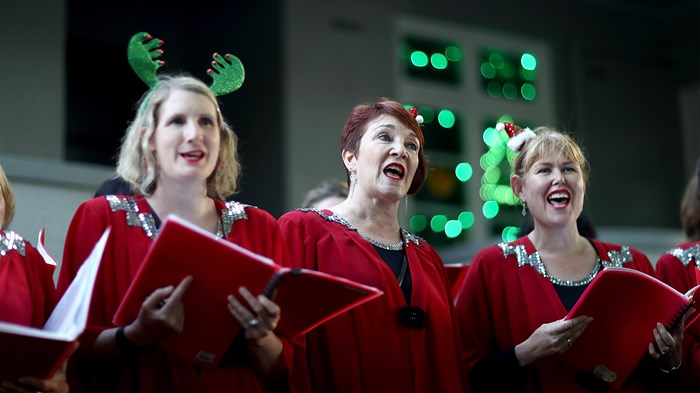 Weary of Christmas tunes freezing out fall celebrations? You’re not just imagining the jingle bells and carols coming earlier each year. According to Spotify plays tracked by EveryNoise, most places started their surge in seasonal listening November 1.

But some countries started the party far earlier. The Philippines, heavily Catholic and among the most devotedly Christian nations on earth, is the first to start playing Christmas music, with a spike on September 1. The country streams classics as well as local favorites like Jose Mari Chan’s “Christmas In Our Hearts.”

By October 28, the festive Philippines had competition from some largely secular but spirited countries: Iceland and the Scandinavian countries of Denmark, Norway, and Finland. Iceland currently leads the world in Christmas listening, with holiday tunes making up more than 8 percent of all streamed music, over triple the global average.

The United States crossed into the Christmas music threshold—playing at least 2 percent Christmas songs—within the past week.

In recent years, many countries make the switch before December (in 2017, 31 countries had passed the Christmas music threshold by then). But South American countries like Paraguay, Uruguay, Argentina and Brazil don’t start their Christmas music in earnest until Christmas Eve of Christmas Day, while little Liechtenstein ends on a high note: In the days leading up to Christmas 70 percent of music streamed in the country is holiday music, triple the global average.

Once the holiday music begins, listeners can expect one song to dominate: Mariah Carey’s “All I Want for Christmas is You” is the most-streamed Christmas song on the planet. (You have to go much further down the list to find a distinctly Christian Christmas song, with Pentatonix’s “Mary Did You Know?” currently ranking No. 31.)

For faith-based radio stations, many of which are listener supported, the decision to switch to Christmas music means balancing the urge to be first with the desires of listeners.

Meg Geissinger, program director, said the network feels the pull to try being the first station in a radio market to put on Christmas music, but it doesn’t always go as planned. WordFM started Christmas music on the Saturday before Thanksgiving one year, but other stations still had them beat and some listeners thought it was too early for Christmas tunes.

During the holidays, the Christmas music might attract listeners who might otherwise not listen to Christian stations.

Can getting an early start on our favorite carols and hymns help “every heart prepare him room”? W. David O. Taylor is no Scrooge—he says if churches want to start singing Christmas songs in November or early December, he won’t tell them to stop.

But as a professor at Fuller Theological Seminary, Taylor turns to the rhythms of the liturgical calendar. Advent, Christmastide (the 12-day Christmas feast beginning on December 25), and Epiphany help Christians rehearse a story of the world, who we are, and what God has done for us.

“Music engenders a way to grasp the world through our physical bodies, it gives us a feel for things that we might not be able otherwise to articulate, it enables us to imagine what, at first glance, may seem improbable or even impossible, and it immerses us in a sphere of metaphors by which we make sense of our personal and social lives,” Taylor said.

Because Advent and Christmas tell such important stories about Jesus’ life, Taylor believes Christians should pay close attention to these liturgical seasons. The secular, cultural trappings of Christmas—school holiday concerts, parties, and shopping—push in to every moment of life. By observing the season of waiting and a season of celebrating Christ’s arrival, the church observes what has come and the longings that still unfilled.

Pastor Courtney Ellis suggests that the church blend its celebration of Christmas and Advent into one season mixed with darkness and hope. She wrote last year in defense of early Christmas, saying:

The holy waiting of Advent combined with the unfettered celebration of Christmas helps us behold the sacred complexity of this season. We’re invited to light candles in the darkness, to proclaim hope through the silence, and to embrace peace amidst the violence of a world in desperate need of a Savior.

Even Mariah Carey observes some liturgical limits on holiday music. She refuses to play Christmas music or perform “All I Want for Christmas is You” until after Thanksgiving.