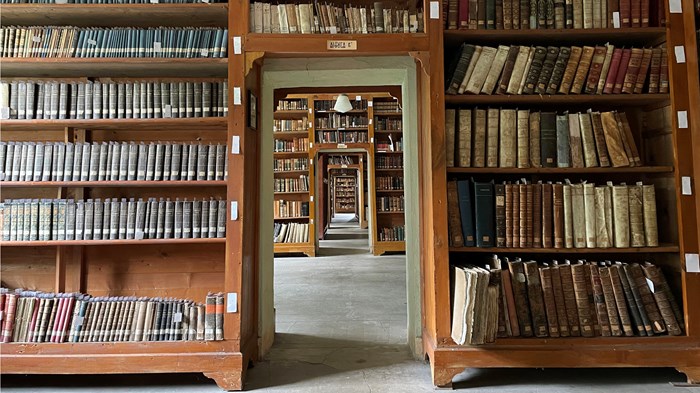 Image: David I. Klein
Rooms upon rooms of books in the library of the Halki Orthodox Seminary on the Turkish island of Heybeliada.

The classrooms and halls of the Halki Orthodox Seminary on the Turkish island of Heybeliada, in the Sea of Marmara south of Istanbul, look much as they did when Konstantinos Delikostantis was a student there more than 50 years ago.

Wooden chairs and black desks line the classrooms, some still bearing the graffiti (in both Turkish and Greek) of their past occupants. The chalkboards, which sit beneath portraits of Turkey’s founding father, Mustafa Kemal Ataturk, look as if they could use a good wash.

At 73, Delikostantis is among the youngest remaining alumni of the school, which counts among its 990 graduates at least two saints, seven patriarchs, seven archbishops, six metropolitans, and countless other clergymen, authors, and theologians who went on to serve as leaders of Orthodox Christianity around the world.

In its heyday, Halki Seminary was a place of intense study, deep introspection, and strong brotherhood, recalled Delikostantis, now an adviser to the spiritual leader of Eastern Orthodox Christians, Ecumenical Patriarch Bartholomew I, a fellow graduate of Halki.

“Halki was the iron theological arm of the Ecumenical Patriarchate,” said Delikostantis, leaning back on a sofa in the office of the Greek Orthodox Patriarchate in Istanbul’s Fener district.

The first monastery on the island, known in Greek as Halki, was founded in the ninth century by Patriarch Photius I. A second was established by Byzantine Emperor John VIII Palaiologos just a few decades before Constantinople was conquered by the Ottomans in 1453.

The school itself was founded in 1844 when then-Patriarch Germanus IV converted part of Photius’ monastery of the Holy Trinity into a high school and a seminary.

However, for 50 years no new students have been permitted to walk through its halls. In 1971, the Turkish government closed the school under a law nationalizing all institutions of higher learning. It was the last school to train priests in modern Turkey, a region that has been the center of the Orthodox church for more than 1,600 years. 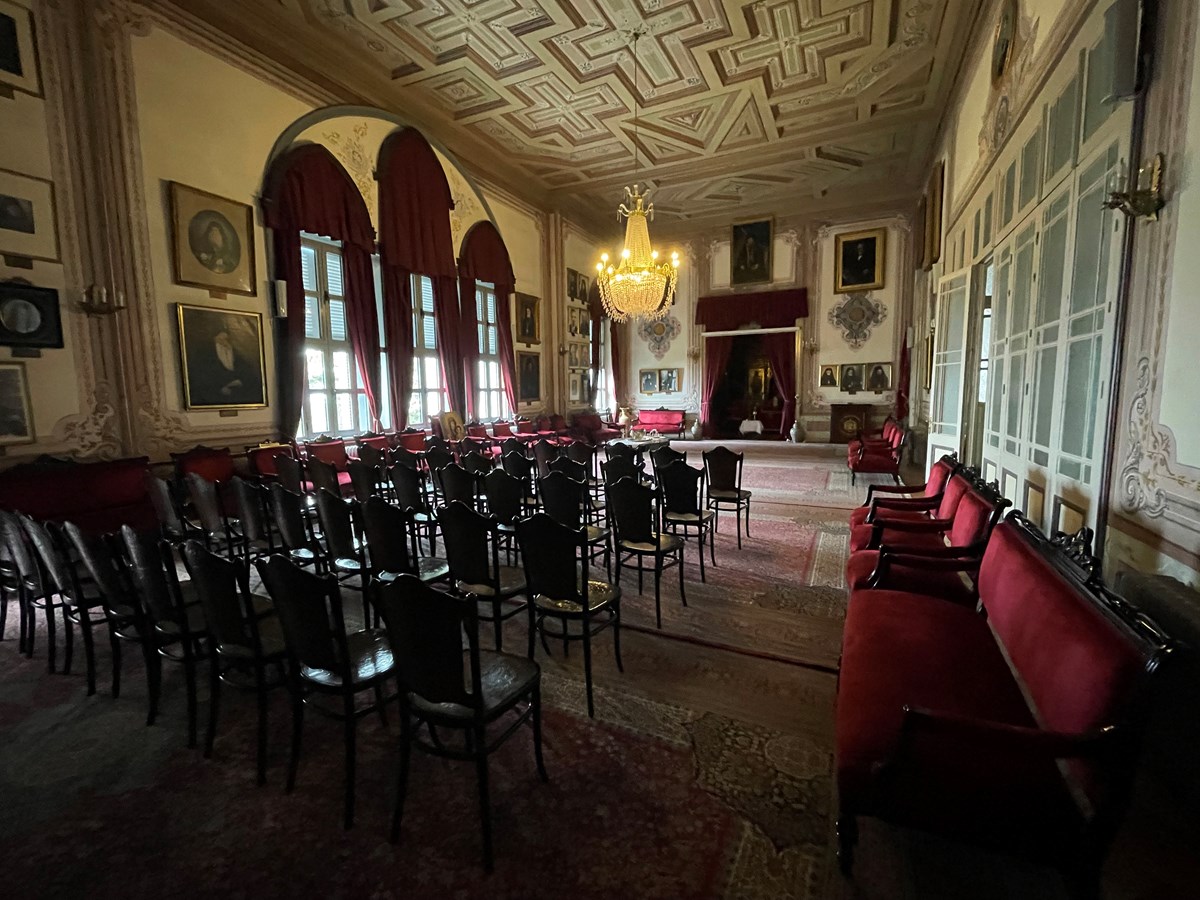 An interior room of the Halki Orthodox Seminary on the island of Heybeliada in Turkey.

The school’s closure is just one chapter in the story of forced migration, pogroms, and other forms of persecution that saw the Greek Orthodox community in Turkey decline from nearly 2 million at the turn of the 20th century to barely 5,000 today.

But with the 50th anniversary of its closing, Orthodox leaders’ longstanding petition to allow the school to reopen has gained new life.

Many of the Orthodox Christians remaining in Turkey feel that they have been robbed of decades of spiritual leadership, while those in far-flung territories of Orthodox Christianity have had their ties to unique Constantinopolitan theological traditions all but severed.

“We lost two generations of priests and clergy and bishops of the church, who are not educated in the only school that the Ecumenical Patriarchate has in Istanbul,” Archbishop Elpidophoros of America, who serves under the purview of the Patriarchate of Constantinople, said in an interview marking the 50th anniversary of the school’s closing earlier this year.

In July, the US State Department issued a statement urging Turkey to allow the reopening of the school.

Turkish authorities fired back, arguing that it was in fact the patriarchate that was responsible for the school’s continued closure, as the patriarchate would not consent to Halki being administered by the state-run faculty of theology.

Ankara has repeatedly tried to use Halki’s possible reopening as a bargaining chip in Turkey’s tense relations with Greece.

During a 2019 visit by Greek Prime Minister Alexis Tsipras, Turkish President Recep Tayyip Erdogan suggested he might allow the reopening of the school if Greece would open a mosque in Athens.

“Look, you want something from us, you want the Halki seminary. And I tell you [Greece], come, let’s open the Fethiye Mosque,” Erdogan said, referring to a 17th-century Ottoman mosque in Athens and Greece’s stalled promises to open a new house of worship for Muslim residents in the Greek capital.

Embroiling the seminary in the sparring between Athens and Ankara has left Istanbul’s remaining Greek Orthodox population frustrated, according to Laki Vingas, a former president of the community.

“It’s so sad to witness that Halki is no longer a matter of education or religious training, but it has assumed a political role and become a symbol of antagonism,” Vingas said. “For a 2-millennia-old church, this is very difficult.” 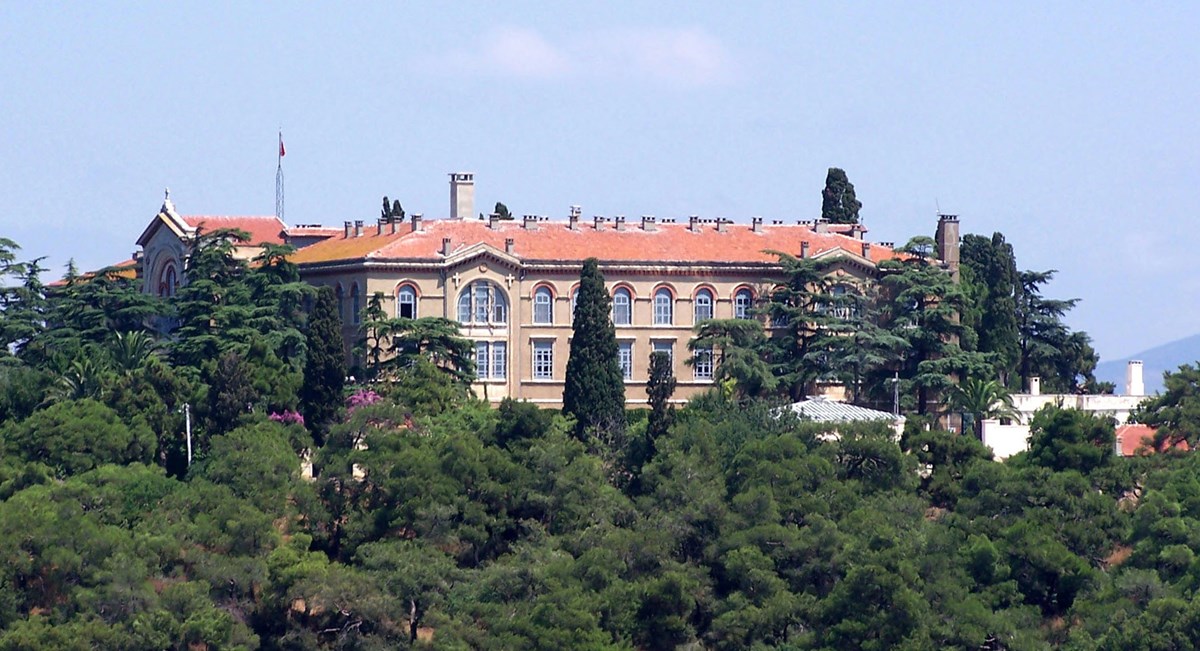 As the years go on, the generation that remembers the place as anything other than a political bargaining chip is fading. A quick scroll through the school’s alumni Facebook page shows mostly death notices above pictures of graduates dressed in both the black robes of the priesthood and secular garb.

In the school’s absence, Turkey’s Orthodox community has had to send its ecclesiastically minded youth to Greece for training.

Delikostantis thinks the distance has had a significant effect. “It is not good for the Patriarchate that our theologians are studying in Thessaloniki or in Athens,” he said. “They lose something in the four or five years when they are there.”

It’s not that the Greek schools are lacking; during his time in seminary they largely had the same learning materials both in Turkey and Greece, he said. But what’s been lost is the “spirit of Halki.”

After a lifetime teaching throughout Europe, Delikostantis has returned to Fener to advise his old friend Patriarch Bartholomew I as an expert on the intersection between human rights and Orthodox theology.

Though the patriarch is just under a decade his senior, the two go back a long way. Both are natives of the Turkish island of Gökçeada—known in Greek as Imbros—and Delikostantis boasts that he was there when the future patriarch was first appointed a deacon in 1961.

Despite Delikostantis’ time at the seminary, he never ended up joining the priesthood like his old friend, instead going on to research the intersection of philosophy and theology. Today, Delikostantis looks as comfortable quoting the words of Immanuel Kant as those of the Nazarene.

Delikostantis says he was first set upon that path during his time at Halki.

“The main characteristic of our school was this combination of academic study and church life,” he explained. “During my seven years there I lived between the church, celebrating the liturgy, and the classroom and library.”

Halki’s students also thrived on the diverse environment of Istanbul. Despite the school’s isolated spot on Heybeliada, the environment of 1960s Istanbul required a measure of openness—not only openness to other sects of Christianity and other faiths, but an appreciation for scientific study and a necessary dialogue with modernity.

“It’s not easy to be faithful and to be open,” Delikostantis said, but it’s something the school inculcated in him and the current Patriarch. “This was, I think, the power of Halki, this combination between faith and science.”

What the future holds for the school remains unclear. Though there’s been little movement on the part of the Turkish government, the patriarchate remains hopeful, having even drawn up renovation plans for potential future use.

“For Turkey, it could be an ornament, you know, a school which produces open people,” Delikostantis said. “Open-minded, nonfundamentalist people of dialogue who accept diversity.”

That was the seminary he remembers.