After setting himself apart from corrupt televangelists and achieving incredible early success, the Christian network chief lived from scandal to scandal.
Daniel Silliman|December 1, 2021 09:30 AM 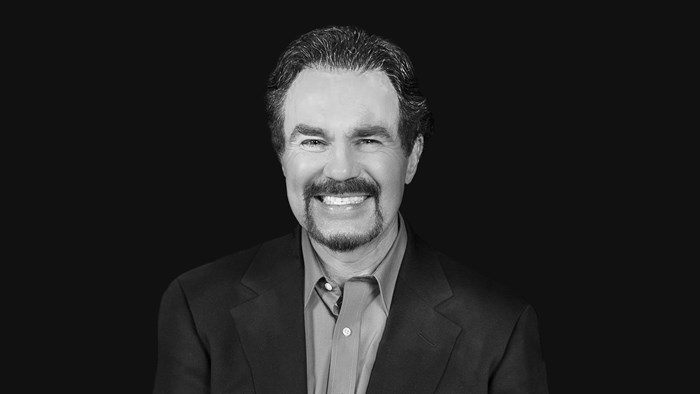 Marcus Lamb, the founder of Daystar Television, died on Tuesday at the age of 64.

Lamb and his wife, Joni Trammell Lamb, launched Daystar more than two decades after Paul and Jan Crouch started the Trinity Broadcasting Network, and more than three after Pat Robertson started the Christian Broadcasting Network. But they managed to compete with and eventually rival the older Christian broadcast companies through a combination of business savvy, incredible timing, and the maintenance of an upright reputation.

Later in life, though, Lamb seemed to tumble into one scandal after another. He made headlines for sex, money, and conspiracy theories, not his passion for proclaiming the message of Jesus.

An ordained bishop in the Pentecostal Church of God, Lamb said he had been committed to spreading the gospel as far and fast as possible ever since he preached his first sermon at 15. His official Daystar bios always failed to mention, however, the truth he told newspaper reporters in the early years: The only audience for the first message was a horse in his parents’ barn.

But if he sometimes embellished his history, cut corners, and fell short of his own ideals, that didn’t damper his success at building a Christian television network that reached millions of people around the world.

Lamb, for his part, always explained his mission in the same way.

“Our assignment is to build television stations … so we can reach the most people in the least amount of time,” he said in the early 2000s. “With television, we can curse the darkness and turn on the light.”

As news of his death spread on social media, Lamb was remembered by prominent pastors and ministry leaders for his commitment to evangelism.

“I will always be grateful for Marcus,” evangelist Greg Laurie wrote on Twitter. “He said ‘yes’ every time we wanted to reach more people through Daystar. Millions have heard the good news because he & Joni dedicated their lives to building a platform for the Gospel to reach the world.”

Oral Roberts University president William Wilson called Lamb’s death “a significant loss for the Kingdom of God” and remembered Lamb as “a media pioneer, an entrepreneur, an evangelist, and a pastor to millions of people around the world who watched him regularly on Daystar.”

Before Lamb died on Tuesday, Joni told viewers of their daily show that he had “the COVID pneumonia” and was hospitalized when the oxygen in his blood dropped to dangerously low levels.

Lamb was an outspoken skeptic of COVID-19 vaccines and eagerly promoted unproven, alternative treatments, including hydroxychloroquine, which the US Food and Drug Administration says has no effect on COVID-19, but has been linked to heart rhythm problems, kidney trouble, and liver failure.

In Lamb’s last fundraising newsletter, he touted Daystar as “the only Christian TV Network that has made continuous efforts to warn you about the dangers of the COVID-19 ‘Vaccine’ and to help you with the truth” about alternative treatments.

According to Charisma magazine, Lamb died from complications related to COVID-19, making him one of more than 770,000 people in the US to do so since the start of the pandemic.

Lamb was born on October 7, 1957, and grew up in a Pentecostal family in Macon, Georgia. He became a Christian at age 5 and felt a call to ministry at a Christian summer camp at age 15. When he got back home, he put on a suit and preached his first sermon to the family horse. For the rest of his life, he marked that as the start of his ministry.

After graduating from Lee College (now University), the Church of God–affiliated school in Cleveland, Tennessee, Lamb started preaching seriously. He toured the country doing “Holy Spirit Crusades.” At one, the 22-year-old evangelist met a 19-year-old woman in a Pentecostal church in South Carolina. They got married two years later in 1982.

Most of Lamb’s Holy Spirit Crusades were not very successful, however, and he grew tired of the constant traveling and small crowds. Preaching in Montgomery, Alabama, Lamb’s ears perked up when he heard about an Assemblies of God church that had purchased a broadcasting license but failed to raise enough funds to start a Christian TV station.

He was still thinking about that station in 1983, when he and his new wife went to Israel and saw TV antennae sticking out of the tents of nomadic Arabic herdsmen. Then, standing on the Mount of Olives looking at Jerusalem, Lamb felt God tell him to go start a television station in Montgomery, Alabama.

The Lambs got the licenses to broadcast at a cut rate of $44,000 and managed to borrow enough money from family and friends to buy some used equipment. The low-power station could not even broadcast to the far side of Montgomery, but federal regulations required cable companies include local TV in the basic subscription package, giving WMCF-TV 45 a firm footing in the regional market.

By 1985, Lamb was able to buy an antenna and broadcast at full power. And by ’87, the station known as “45 Alive” had about 1,000 financial supporters, allowing the Lambs to start taking home a weekly salary—a combined $600.

Just as the station was getting off the ground, though, it was knocked back by scandal. The Lambs hadn’t been accused of anything, but the accusations of sexual and financial misconduct against Jim Bakker in 1987 and Jimmy Swaggart in 1988 caused widespread suspicion of all Christian TV.

The Lambs worked hard to distinguish themselves from other televangelists. At one point they even contacted the Montgomery Advisor to say that any financial supporter could come and examine the TV station’s checkbook.

“We’re trying to be different. That doesn’t mean we’re perfect. But we’re purposely not trying to do the same stuff,” Lamb told the newspaper. “The overriding motivation of my heart … is how can we reach the most people with the gospel.”

In 1990, the Lambs sold the Alabama station to Trinity Broadcasting, moved to Texas, and bought another TV station. They started eyeing other TV stations when the federal government rolled back regulation limiting the number of low-powered stations that one company could own. The Lambs bought a second station in Georgia, then one in Colorado—each carried in their respective region’s basic cable package—and then managed to start buying stations in major urban markets: Houston, Seattle, Phoenix, and Boston.

On New Year’s Eve, as 1997 turned to 1998, the Lambs launched Daystar Television with about a dozen outlets, broadcasting an inaugural sermon by preacher T. D. Jakes.

The Lambs produced several of their own daily shows and sold airtime to preachers across the US, often luring them away from the other Christian TV networks. Big names on Daystar included Joyce Meyer, Charles Stanley, Benny Hinn, Paula White, and Joel Osteen.

By the early 2000s, the network was grossing about $14 million per year in airtime sales, and another $14 million in donations. To remind himself of the potential moral pitfalls of TV success, Lamb kept a copy of Jim Bakker’s tell-all I Was Wrong displayed prominently in his office.

The reminder of others’ sin did not keep him from his own, however. In 2010, Lamb went on the air with his wife to confess to a sexual relationship with a woman who worked in human resources for Daystar. Lamb described it as an affair and said he took full responsibility for his moral failure while seeking counseling to reconcile with his wife.

Lamb decided to go public with his confession because three former employees were suing Daystar, claiming Lamb and the woman in human resources lied about the moral climate of the company when hiring new staff.

Lamb countersued, claiming the former employees conspired together to extort money from him. Police investigated and dismissed those allegations and Daystar dropped its suit and settled with the employees for an undisclosed sum of money.

Daystar was back in the news in 2011, when an NPR investigation found the television network claimed to give away about three times as much as it actually did. While fundraising, Lamb talked on air about extensive charitable giving, when in fact only 5 percent of donated funds were given away, and the largest single gift was to Oral Roberts University, where Lamb’s three children were attending school.

There were more allegations of inappropriate financial gain in 2020, when Daystar received COVID-19 relief funds from the federal government and purchased a private jet. Lamb told Inside Edition that the ministry used different funds for the Gulfstream V but then struggled to answer questions about why, if this was a ministry expense, it had been used to fly the Lamb family to Florida for a beach vacation.

“The truth of the matter is, there’s not a lot of people God can trust with money,” Joni Lamb had once told the Fort Worth Star-Telegram in the early 2000s. “It can corrupt, and it does.”

None of the scandals seriously impacted the continued success of Daystar, though, and the TV network continued to expand in the US and abroad. It became the first Christian TV programing to broadcast in Israel (winning a supreme court battle to stay on the air), and expanded to broadcast from Ireland to Kenya to Pakistan.

To the end, Lamb said television was just a way to open a window for the work of God.

“There are tons of people who would never walk into the door of a church,” he said. “But if they have a remote control, they may stop and watch us out of amusement or curiosity. And if they watch often enough, the Holy Spirit will touch them.”

Lamb is survived by his wife and children, Jonathan, Rachel, and Rebecca.