Hundreds killed by Eritrean soldiers, alleges deacon at the Church of St. Mary of Zion, which Ethiopian Orthodox believe hosts the Ark of the Covenant.
Cara Anna - Associated Press|February 18, 2021 11:45 AM 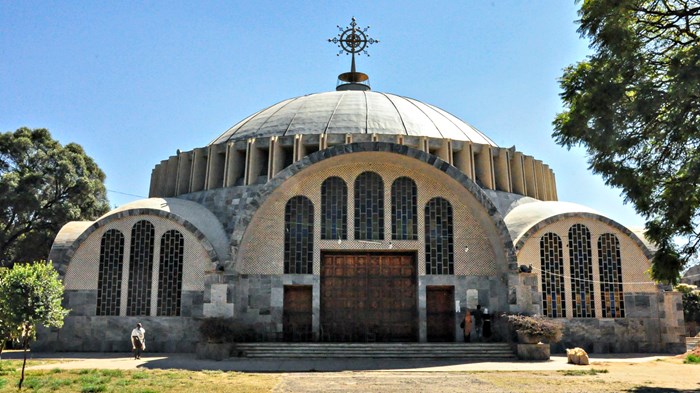 Image: AP Photo
The Church of St. Mary of Zion in Axum, in the Tigray region of Ethiopia, in November 2013.

Update (Feb. 26): A new report by Amnesty International, based on interviews with 40 witnesses, also alleges that Eritrean soldiers systematically killed “many hundreds” of people in Axum.

Bodies with gunshot wounds lay in the streets for days in Ethiopia’s holiest city. At night, residents listened in horror as hyenas fed on the corpses of people they knew. But they were forbidden from burying their dead by the invading Eritrean soldiers.

Those memories haunt a deacon at the country’s most sacred Ethiopian Orthodox church in Axum, where local faithful believe the ancient Ark of the Covenant is housed. As Ethiopia’s Tigray region slowly resumes telephone service after three months of conflict, the deacon and other witnesses gave The Associated Press a detailed account of what might be its deadliest massacre.

For weeks, rumors circulated that something ghastly had occurred at the Church of St. Mary of Zion in late November, with estimates of several hundred people killed. But with Tigray cut off from the world and journalists blocked from entering, little could be verified as Ethiopian and allied fighters pursued the Tigray region’s fugitive leaders.

The deacon, who spoke on condition of anonymity because he remains in Axum, said he helped count the bodies—or what was left after hyenas fed. He gathered victims’ identity cards and assisted with burials in mass graves.

He believes some 800 people were killed that weekend at the church and around the city, and that thousands in Axum have died in all. The killing continues: On the day he spoke to the AP last week, he said he had buried three people.

“If we go to the rural areas, the situation is much worse,” the deacon said.

The atrocities of the Tigray conflict have occurred in the shadows. Ethiopian Prime Minister Abiy Ahmed, who won the Nobel Peace Prize in 2019 for making peace with neighboring Eritrea, announced the fighting as the world focused on the US election. He accused Tigray’s regional forces, whose leaders dominated Ethiopia for nearly three decades before he took office, of attacking the Ethiopian military. Tigray’s leaders called it self-defense after months of tensions.

While the world clamors for access to Tigray to investigate suspected atrocities on all sides and deliver aid to millions of hungry people, the prime minister has rejected outside “interference.” He declared victory in late November and said no civilians had been killed. His government denies the presence of thousands of soldiers from Eritrea, long an enemy of the Tigray leaders.

Ethiopia’s narrative, however, has crumbled as witnesses like the deacon emerge. The foreign ministry on Thursday acknowledged that “rape, plunder, callous & intentional mass killings” could occur in a conflict where “many are illegally armed.” Its statement blamed Tigray forces for leaving the region “vulnerable” and said any serious offense will be investigated. It did not mention Eritrean soldiers.

Eritrea’s government rejected as “outrageous lies” the claims of a massacre in Axum.

“Relevant Ethiopian institutions had long ascertained the utter fallacy of the story,” said Information Minister Yemane Gebremeskel in a series of Twitter posts.

Axum, with its ancient ruins and churches, holds major significance for the Ethiopian Orthodox faithful, who believe that the Ark of the Covenant, built to hold the tablets inscribed with the Ten Commandments, is located there.

“If you attack Axum, you attack first of all the identity of Orthodox Tigrayans but also of all Ethiopian Orthodox Christians,” said Wolbert Smidt, an ethnohistorian who specializes in the region. “Axum itself is regarded as a church in the local tradition, ‘Axum Zion.’” 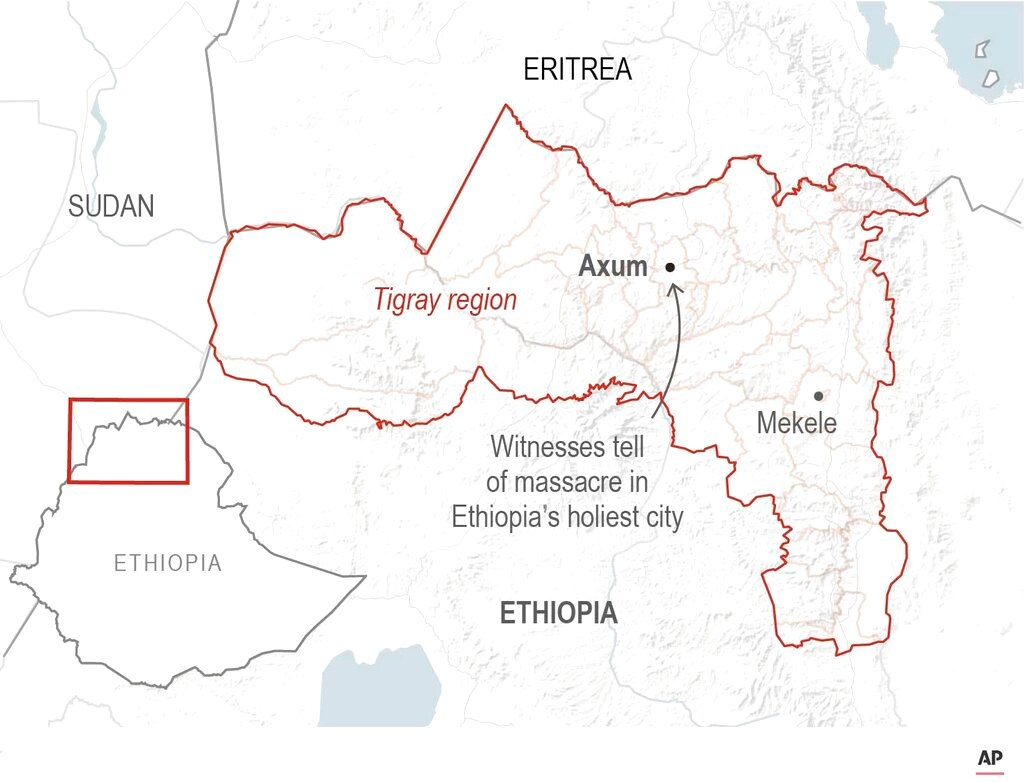 In a normal year, thousands of people would have gathered at the Zion church in late November to celebrate the day Ethiopians believe the Ark of the Covenant was brought there after it disappeared from Jerusalem in ancient times.

Instead, the church had become a refuge for people who fled the fighting elsewhere in Tigray. They sheltered there as worship services were underway two days before the anniversary.

Eritrean and Ethiopian soldiers had arrived in Axum more than a week earlier, with heavy bombardment. But on November 28, the Eritrean soldiers returned in force to hunt down members of the local militia who had mobilized against them in Axum and nearby communities.

The deacon recalled soldiers bursting into the church, cornering and dragging out worshipers and shooting at those who fled.

“I escaped by chance with a priest,” he said. “As we entered the street, we could hear gunfire all over.” They kept running, stumbling over the dead and wounded along with others trying to find places to hide.

Most of the hundreds of victims were killed that day, he said, but the shooting and looting continued the following day.

“They started to kill people who were moving from church to home or home to home, simply because they were on the street,” another witness, visiting university lecturer Getu Mak, told the AP. “It was a horrible act to see.” He watched the fighting from his hotel room, then ventured out as it eased.

“On every corner, almost, there was a body,” he said. “People were crying in every home.”

Another witness, who spoke on condition of anonymity for fear of retaliation, said soldiers killed a man at his home near the Zion church. “How can I tell you? So many dead,” said the man, who has since escaped to the Tigray capital, Mekele.

After the killings in Axum came an uneasy period with soldiers roaming the streets and families searching for loved ones. At night, hyenas descended from nearby hills.

The city began to smell of death as some bodies went untouched for days.

“I saw a horse cart carrying around 20 bodies to the church, but Eritrean soldiers stopped them and told people to throw them back on the street,” said Getu, the university lecturer.

Witnesses elsewhere in Tigray have reported being unable to bury bodies, calling it an added insult. They say soldiers tell them that “no one mourned our fighters, so why should we let you mourn?”

Finally, when the soldiers left the city to pursue other fighters, residents mobilized to bury the bodies, the deacon said.

“We could not do a formal burial,” he said. “We buried them en masse” in graves near the Zion church and others.

Some of the dead were among the hundreds of thousands of people in Tigray displaced by the conflict and not known to Axum residents. Their identity cards were collected in churches, where they await the discovery of loved ones.

The deacon said residents believe the Eritrean soldiers were taking revenge for the two-decade border war between Ethiopia and Eritrea that played out nearby and ended after Abiy became prime minister. Some of the soldiers told residents they had been instructed to kill people as young as 12, he said.

Another witness, a 39-year-old who gave only his first name, Mhretab, and escaped weeks ago to the United States, asserted that Ethiopian federal police did nothing to rein in the Eritrean soldiers.

“I said to them, ‘Listen, you’re Ethiopian, they’re destroying Ethiopian cities. How is this possible?’” Mhretab recalled.

”They said, ‘What can we do? This shouldn’t have happened from the beginning. This is from above,’” indicating that it had been decided by senior officials, he said.

He said he ferried bodies to a mass grave by the Zion church and estimated that he saw 300 to 400 there.

The deacon believes that the Eritrean soldiers, in their hunt for Tigray fighters, have killed thousands more people in villages outside Axum. “When they fight and lose, they take revenge on the farmers and kill everyone they can find,” he said. “This is what we’ve seen in the past three months.”

Getu echoed that belief, citing his uncle, who survived such a rural confrontation.

The deacon has not gone to the villages outside Axum. His work remains with his church, where services continue even as he says the Tigray conflict is as fierce as ever.

“We’re also protecting the church,” he said. “Even now, I’m talking to you from there. We are not armed. What we do is mostly watching. And, of course, praying that God protects us.”