IF: Gathering kicks off crowdfunding campaign where donors sponsor a verse a month toward global Scripture access by 2033.
Megan Fowler|March 12, 2021 12:40 PM 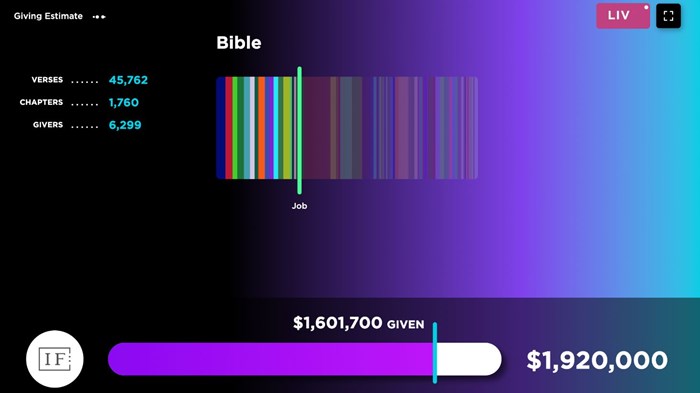 Image: 12VC
The IF: Gathering campaign is on its way to funding a second full translation.

The Bible translation alliance IllumiNations has a goal of making God’s Word accessible to all people by 2033, and it’s inviting partners to support its work one verse at a time.

Through IllumiNations’ 12 Verse Challenge (12VC), donors can cover translation costs for 12 verses of Scripture at $35 a month for a year. The challenge kicked off at this month’s virtual women’s conference IF: Gathering, where attendees pledged over $1.5 million toward the effort— enough to sponsor translating the entire Bible for an unreached people group and make significant progress on a second one.

As thousands of women tuned into the March 6 event, the display on the 12VC site scrolled through the chapters and verses their pledges had sponsored. More than 750 views signed up for the challenge within the first five minutes.

Allen watched alongside pastor David Platt, a speaker at the event, as the campaign met the cost of its first full Bible translation—just over $1 million—in a span of five hours, and the donations kept rolling in. “This is our most important work to date,” she said.

Translators estimate that nearly 1 billion people have little or no access to Scripture in a language they can understand (they call it “Bible poverty”).

IllumiNations, a collaboration among 10 top translating ministries, has been able to accelerate the timeline for all people to have access to the Bible from 2150 to 2033—as long as the funding comes through to back the translators already in the field. IllumiNations currently tallies 307 current projects on their website, each with a bar indicating how much more money is needed to complete the translation.

The translation funded by IF through the 12 Verse Challenge will go to people in western Ethiopia. “Because of you, we're able to help the Konta, Oyda, and Melo people groups of Ethiopia have the Bible in their language,” IllumiNations wrote in an Instagram post.

According to the Joshua Project, a combined 235,000 people speak Oyda, Melo, and Konta. Though Christianity is considered their primary religion, and they all have portions of the New Testament, none of these groups has a full Old Testament translation.

Allen said the funds raised will also help a translation project in a restricted country where churches must meet in secret. As of March 12, more than 6,300 women had pledged.

IllumiNations has a goal that by 2033:

100% would have access to at least some portion of Scripture

2 viable Bible translations would be available in the world’s largest 100 languages, including key revisions completed in 26 major languages of the world

The IF fundraising campaign is the launch of the new 12 Verse Challenge model, and churches can now sign up to host a challenge themselves. IllumiNations says, “If just one percent of the Christians in America alone would fund the translation of 12 verses at $35 per verse, this task would be completed.”

This isn’t the first time IF: Gathering has highlighted Bible translation. The 2017 the event featured a Seed Company translator, and 650 women committed to monthly sponsorships to fund verse-by-verse translation.

Framing unreached people groups as living in Bible poverty makes the broad challenge of Bible access seem tangible and personal, like sponsoring a child in poverty. And during a time when many ministry connections have gone digital, it allows women participate in global missions without having to leave their ZIP codes.

Historically, Christian women have been a driving force in Bible translation work. “If it hadn’t been for single women over the 70-year history of Wycliffe, half of the translations wouldn’t have been completed,” Russ Hersman, Wycliff Bible Translators’ former chief operations officer, told Christianity Today in 2017. At the time, women made up 85 percent of Wycliffe’s translation force.

“I cannot imagine a more powerful force on earth than these women in their places coming together to change things,” Allen said. “They are a tremendous force for good and change.”