Advocates say more subtle approaches and one-on-one engagement may actually do more to inform the unvaccinated without further dividing the faithful.
Kate Shellnutt|May 10, 2021 06:00 AM 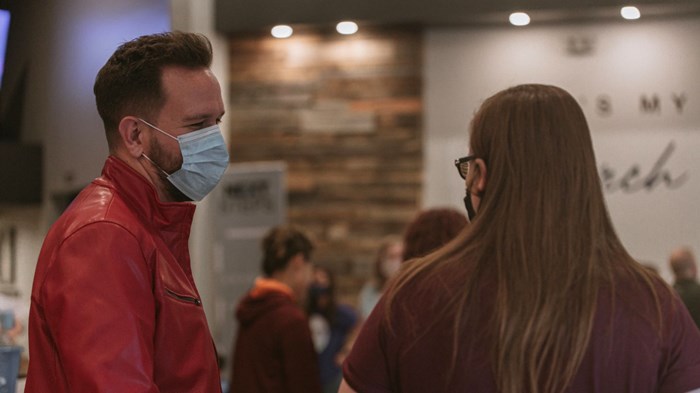 As COVID-19 vaccination rates slowed this spring, Americans’ attention turned toward the groups less likely to get the shot, including white evangelicals.

Black Protestants were initially among the most skeptical toward the vaccine, but they grew significantly more open to it during the first few months of the year, while white evangelicals’ hesitancy held steady.

With African Americans, many credit robust campaigns targeting Black neighborhoods, launching vaccination clinics in Black churches, and convening discussions featuring prominent Black Christian voices for reducing rates of hesitancy. So for those eager to see higher levels of vaccination, the question became: Are white evangelical leaders doing enough to engage their own?

The latest poll from the Kaiser Family Foundation, a nonprofit research organization focused on health issues, found that as of the end of April, white evangelicals (54%) were about as likely to have received the COVID-19 vaccine as the country overall (56%).

The difference comes with the attitudes among the unvaccinated. White evangelicals are half as likely as Americans overall to say they plan to get the shot ASAP, and 20 percent say they definitely won’t be getting the shot, 7 percentage points lower than the rest of the country.

Most evangelical churches in the country span a range of perspectives on vaccination, which makes it difficult for pastors to know when or how to address the topic.

“I know pastors who won’t even mention masks because people would leave. I’d say vaccines are even more sensitive,” said Dan DeWitt, who directs the Center for Biblical Apologetics and Public Christianity at Cedarville University. “Pastors feel so constrained. They want to take care of their people, but they know one careless comment could cost them.”

The issues dividing the country in 2020 divided churches too. While pastors tried to adapt worship services and continue to provide spiritual care for the suffering and mourning, congregational disputes over politics, racial issues, and COVID-19 responses spiked. Church leaders fielded complaints for being too cautious or not cautious enough, with members threatening to leave or simply making the move over reopening plans.

After a year like that, some don’t feel comfortable publicly endorsing or rejecting the shot; maybe they would if tensions weren’t so high. Even pastors who personally trust the vaccine and would recommend it may worry that it’s not their topic to preach on or that doing so would unsettle their congregation.

Curtis Chang, the former pastor and Fuller Theological Seminary senior fellow behind ChristiansAndtheVaccine.com, says pastors are in a tough position. “They’re really stuck. They’re feeling paralyzed and muzzled,” he said. He challenges them to think beyond Sunday sermons to other ways to engage the issue.

Chang’s site and campaign offer a slate of informative videos for Christians and for pastors in particular. His message to those leading evangelical congregations: “Don’t feel like you need to preach on this from the pulpit. Look for other subtle ways to exercise your influence.”

That’s what Kentucky minister Carl Canterbury did. He told the Lexington Herald-Leader that he wouldn’t address the vaccine from the pulpit, but, knowing that vaccine misinformation is rampant in his small town in east Kentucky, he would talk to fellow members at Louellen Pentecostal Church about why he went ahead and got the Johnson & Johnson shot.

“So many people think it’s a conspiracy, and they want to know, are you getting it? The day I had my shot, I had four members in our church to stop by and ask, did I take the shot, and I told them, yes,” Canterbury said, noting that every pastor in the small town of Closplint had also been vaccinated. “Because I did, they did.”

What happened at his Pentecostal church, where people changed their mind after hearing a pastor or church member talk about why they got the shot, is a promising trend.

And it makes sense. Though many people were eager to immediately roll up their sleeves for the COVID-19 jab, having questions about the new vaccines or wanting to wait for others to get the shot is actually a common, natural response, wrote epidemiologist Gideon Meyerowitz-Katz.

“It’s also worth reiterating that most of these hesitant people do eventually get vaccinated. Sometimes they are late, sometimes they take a while to convince, but most of them are reasonable people worried about something they don’t yet fully understand,” he said. “Most can also be reassured with time and adequate information shared by medical providers.”

PRRI found in March that among churchgoers who are waiting to see if they’ll get the vaccine, nearly half of white Protestants said engagement from their faith community—either seeing others get vaccinated or hosting events like forums or clinics—would make them more likely to do so.

The poll also found that white evangelical Protestants who attend church more often are slightly less likely to want to get the vaccine (in March, 43% said they had done so or planned to ASAP) than those who attend less often (48%). Among Black Protestants, it was the opposite; church attendance was correlated with greater openness to the vaccine.

Chang suggested that the Black church tradition has primed them to see health as a community issue, and that Black churchgoers are more likely to trust the model set by their pastors—many of whom signed up for the vaccine early in public-facing vaccination campaigns.

As vaccine access expanded in March and April, many prominent pastors touted their decision to get the vaccine, such as Southern Baptist Convention president J. D. Greear, who posted a #sleeveup selfie on Twitter. Others opened their churches as vaccination sites, such as First Baptist Dallas pastor Robert Jeffress, a former evangelical adviser to President Trump.

But many white evangelicals see vaccination not as a mandate of their faith but as a matter of personal conscience. It’s between them and their families, them and their health care provider, or them and God.

There are a few who embrace conspiracy theories about the vaccine and the coronavirus, of the sort promoted by evangelical leaders such as Eric Metaxas, and some who claim the inoculation is somehow connected to the “mark of the beast.” More commonly, though, evangelicals who are hesitant to receive the vaccine were resisting what they saw as cultural pressure to take away their freedom to make an individual decision.

Chang said that for some the attitude is, “I made my decision. Don’t tell me what to do,” or “I prayed about it, God told me not to take the vaccine, therefore end of discussion.”

Christian messaging around the COVID-19 vaccine has employed a range of theological reasoning: Vaccination is a way to take advantage of the blessings and protections God gives us through science. It’s an expression of love and care for our neighbors, especially those who are medically vulnerable. It allows us to participate in God’s healing of the world.

As stances on masking and vaccination become conflated with ideological positions, evangelicals are also sensitive to how they talk about the issues in faith terms.

At Madison Baptist Church in Georgia, pastor Griffin Gulledge models wearing a mask to church and prays during services to thank God for the vaccine and for effective treatments against the coronavirus—“That sends a message,” he says—but he also believes that he’s not a public health expert, and people may have good reasons for waiting to vaccinate.

“Christ tells us to love your neighbor as yourself, then the apostle Paul tells us to maintain the unity of the Spirit and the bond of peace. I think those are two things we need to balance,” said Gulledge. “I don’t think it is reasonable for people to say in all cases, universally, to love your neighbor you must follow this or that precaution and you must get vaccinated at this time. … These things are complicated. Reasonable people are going to come to different conclusions.”

Despite assumptions about COVID-19 approaches in the rural South, 30-year-old Gulledge said the “vast majority” of his church was eager to get vaccinated, so much that they helped him find an appointment to get the shot when he moved to Madison to become the church’s pastor in March of this year.

Being a pastor and being a part of Christian community has always involved designating between matters of gospel importance and individual freedom. Lately, those issues have come up in particularly visible, fraught ways as the country takes sides on pandemic responses and vaccines.

DeWitt at Cedarville points out how much tone and perception matter when it comes to how churches address COVID-19. What some people see as an act of caring, others see as overreach.

DeWitt also sees the attitudes over coronavirus responses as tied to deeper issues in the American church, where he worries too many people are conflating “scriptural identity” and “political identity.” “We’re in a culture in which things that are superficial are seen as deeper loyalties,” he said.

The fact that American evangelicalism is so fragmented—that the big-name ministry leader who inspires one group of evangelicals may totally turn off another—makes it a challenge to engage the movement as a whole, even when calling on shared beliefs and values.

“The recipe here is information plus trust,” said Chang. “We can provide the information. The trust has to come from a person who’s sending this along and saying to their friend or their church or their family, ‘Hey, would you be willing to take a look?’”