SBC has commited to cooperating with the federal investigation, which spans multiple entities.
Kate Shellnutt|August 12, 2022 04:07 PM 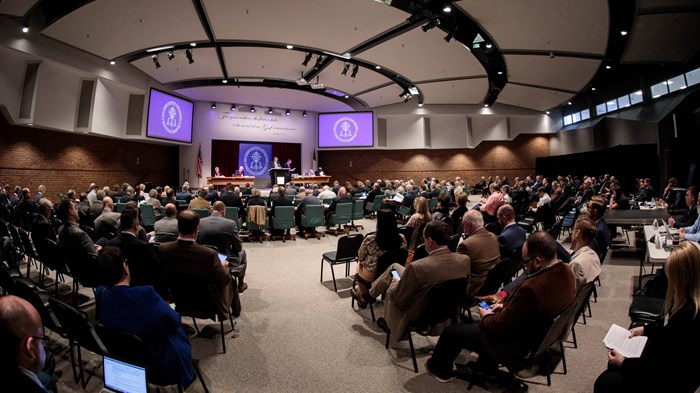 A federal investigation will look into the largest Protestant denomination’s response to abuse, following a bombshell report commissioned and released by the Southern Baptist Commission (SBC) in May.

The SBC Executive Committee confirmed on Friday that the Justice Department “has initiated an investigation into the Southern Baptist Convention, and that the investigation will include multiple SBC entities.”

The general counsel for the Executive Committee (EC)—which oversees day-to-day business for the convention and was the subject of the SBC’s own abuse investigation—said the EC has received a subpoena, but no individuals have been subpoenaed at this point.

The SBC and its entities have committed to cooperating with the investigation.

A statement signed by the presidents of each SBC entity and seminary referred to their involvement as part of their ongoing commitment to transparency and abuse reform.

“While we continue to grieve and lament past mistakes related to sexual abuse, current leaders across the SBC have demonstrated a firm conviction to address those issues of the past and are implementing measures to ensure they are never repeated in the future,” it read.

An independent investigation by Guidepost Solutions into the EC, released in May 2022, found that over the past 20 years, its leaders had compiled a secret list of more than 700 abusive pastors, mishandled allegations, and mistreated the victims who asked for help.

The investigation, which cost over $2 million, spanned 330 interviews and five terabytes of documents collected over eight months.

Hours before the EC confirmed the Justice Department inquiry, blogger Ben Cole tweeted that federal investigators had sought the unredacted version of that report and had begun issuing grand jury subpoenas.

The EC general counsel declined to comment further on their discussions with federal investigators as the investigation is ongoing.

It is not clear what potential or suspected crimes they are looking into. The Department of Justice (DOJ) writes on its website, “Child sexual abuse matters are generally handled by local and state authorities, and not by the federal government.”

But the DOJ has looked into church abuse before. It began investigating abusive Catholic priests in Pennsylvania in 2018, following a state grand jury. At the time, the Washington Post wrote that “the decision to launch such a probe, even one limited to a single state, is noteworthy because the federal government has long shied away” from responding to allegations of the church’s coverup.

The abuse issue garnered attention in Southern Baptist circles later. Thanks to the public witness of survivors and reports by media including the Houston Chronicle, it came to the forefront after #MeToo and #ChurchToo took off.

At its June annual meeting, the SBC voted to adopt reforms including launching an official database of credibly accused pastors—a tool they hope will prevent abusers from moving between churches.

The task force responsible for studying how to enact those changes was named on Monday, led by two pastors outspoken in favor abuse reform and transparency: Marshall Blalock of South Carolina and Mike Keahbone of Oklahoma.

This week, new members of the EC also gathered at SBC headquarters in Nashville for training and orientation, after an unprecedented exodus of leaders and trustees took place around the decision to waive attorney-client privilege in the Guidepost investigation.

The 288-page report from Guidepost revealed how much trustees had been kept in the dark around the decisions made by EC staff and lawyers Jim Guenther and Jaime Jordan—a legal team that had represented the entity from 1955 until last year.

Current EC leaders hope for a new era of transparency and mission for the EC. One of its new lawyers, Gene Besen of Bradley Arant Boult Cummings LLP, referenced “changing the direction,” and the EC’s new interim president, McLaurin, talked about “changing the culture.”

Talk of reform and repentance extends across the convention, with state associations launching their own abuse response protocol and seminaries mandating training.

“While so many things in the world are uncertain, we can be certain that we serve a mighty God. Nothing, including this investigation, takes Him by surprise,” the entity presidents said in their statement.

“We take comfort in that and humbly ask you be in prayer in the days and weeks ahead. Specifically, we ask God to grant wisdom and discernment to each person dealing with the investigation.”