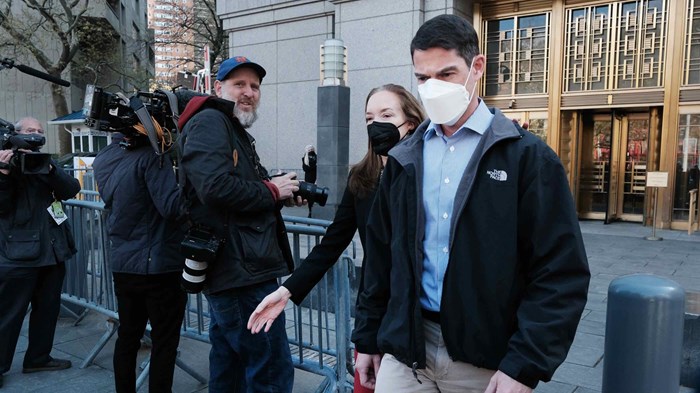 A former managing director at Archegos Capital–a family office at the center of one of Wall Street’s biggest white collar crime cases in decades–has filed a lawsuit alleging fraudulent activity at the Grace and Mercy Foundation, the Christian nonprofit connected to the firm. In seeking millions in compensation, he claims the foundation’s $800 million in assets includes funding diverted from Archegos’s employees’ compensation.

In April, federal prosecutors charged Archegos founder Bill Hwang, a billionaire outspoken about his Christian faith, with racketeering and “massive fraud.” In 2021, banks lending to Archegos lost $10 billion, and the firm’s collapse evaporated $100 billion from the stock market, according to prosecutors. Hwang is currently free on a $100 million bond and awaiting trial.

Brendan Sullivan, who started at Archegos in 2014 and resigned during its downfall in March 2021, is seeking millions in compensation he says he is owed. He says Archegos leadership forced employees to put their bonuses back into a fund at the firm, which he alleges Archegos then invested in stocks and transferred to Grace and Mercy. The foundation, he said, then sold the stocks and got the profits. That would protect appreciated stock from taxation and give Archegos a tax deduction for the donation.

“These share transfers to the foundation were all coming from the Archegos Fund, which included employee deferred compensation … which was done without the knowledge or consent of employees,” the lawsuit says. The employee fund lost $500 million total, Sullivan says. Sullivan was owed $30 million in deferred compensation at the time of his resignation and has not received any of it, he said. He was one of Archegos’ 27 full-time employees, according to the lawsuit, which is directed at the firm, its executives, and the foundation.

Bloomberg columnist Matt Levine noted tables within the lawsuit showed Sullivan had put only $3.8 million into the deferred compensation fund and that he had come up with the $30 million value based on Archegos’ inflated profits in March 2021. A “combination of chutzpah and careful contract reading,” Levine said about suing for $27 million in paper profits.

Sullivan—who was part of the Christian community in Manhattan and did a fellowship through Redeemer Presbyterian Church—alleges Hwang ran the fund like a “cult” and used Christianity as a way to pressure employees to invest their earnings back into Archegos. He said questions about employees’ faith were a part of performance reviews and that they were pressured to go to lunchtime Scripture readings at the foundation, which was in the same office.

Sullivan is suing as a disgruntled former employee—he mentions career opportunities Hwang promised him and never delivered—and though there are typos throughout, his wide-ranging 99-page lawsuit is filled with emails and conversations specifically detailing his grievances. In the early 2000s, Enron employees who lost millions in retirement after Enron’s collapse brought similar lawsuits and ultimately won a class-action settlement.

Grace and Mercy has distributed about 5 percent of its assets a year—amounting to around $30 million in 2019, the most recent year on record—to a variety of Christian organizations like the Bowery Mission, Prison Fellowship, and Fuller Theological Seminary. Sullivan alleges the grants to Christian groups were a cover for Hwang’s usage of the fund for his personal benefit.

Sullivan alleges that Hwang described the foundation as his “escape pod” and when Archegos was in trouble Hwang frequently told concerned employees that if the firm collapsed, he could move them to the foundation and use its capital to restart another investment firm, “Archegos 2.0.” Sullivan said that Hwang considered transferring Grace and Mercy assets to Archegos but did not after receiving counsel that it would be illegal.

“Hwang mentioned that some Archegos employees would be given foundation money to start their own investment funds, from which the foundation could generate management fees,” Sullivan alleges.

Central to Sullivan’s lawsuit is the fact that Archegos and Grace and Mercy functioned as the same entity though they were separate on paper. The two shared office space and employees, and Sullivan said they often had “firmwide” meetings that included employees from both Archegos and the foundation.

“Hwang regularly and informally moved money and shares from Archegos accounts to the foundation, and his family’s own private non-fund accounts, utilized Archegos staff, administrative functions, and resources to operate the foundation,” the lawsuit reads.

On the foundation’s most recent tax form, Archegos chief financial officer Patrick Halligan was listed as the bookkeeper for Grace and Mercy. Halligan faces racketeering and fraud charges in the Archegos case alongside Hwang. “Halligan…was central to the intermingling of assets, shares, and monies,” Sullivan’s lawsuit alleges.

The lawsuit also names Andy Mills, an Archegos executive who is a former president and board chair of The King’s College, a Christian college in New York. Mills was not charged in the federal case.

Sullivan alleges that when Archegos was in trouble Hwang and Mills assured employees of compensation through Archegos, Hwang’s personal funds, or the foundation. He says that Mills threatened employees who were thinking about leaving, saying that people who quit would no longer receive any of their deferred compensation.

David Shapiro, an expert on financial crimes at the John Jay College of Criminal Justice, said authorities might be more willing to go after the foundation if there is self-dealing that parallels Archegos and if the two functioned as one entity.

However, Shapiro said, the foundation seemed to be run with more caution than risk-taking Archegos, with the foundation’s rate of returns exceeding the amount it was giving away.

Shapiro said that he might “worry more” for the foundation if the accounting firm doing the 990s was a small outfit rather than a major accounting firm like KPMG, which has more financial independence from a single client and could call out ethical lapses. The 2019 990 for Grace and Mercy lists a 3-person accounting firm.

“When you mess around with compensation of employees, and you have ERISA violations, that’s very serious stuff,” said Shapiro. Employment Retirement Income Security Act (ERISA) fraud is among the allegations in the lawsuit. “It’s really a horrible situation.”

Meanwhile the federal case against Hwang and Halligan is proceeding, with prosecutors having to deliver discovery—evidence the defense can review—by July 20.