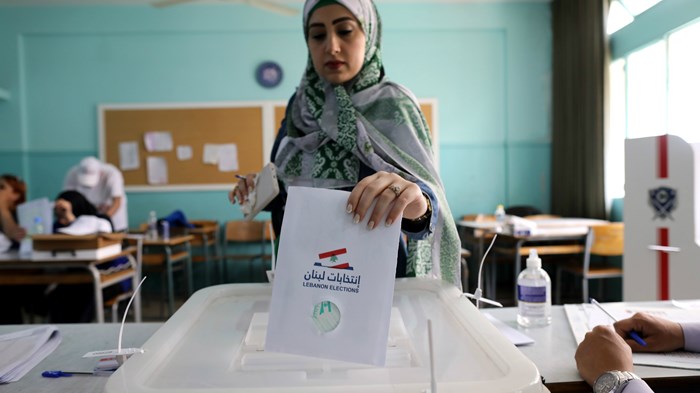 Image: Marwan Tahtah / Getty Images
A woman casts her ballot in parliamentary elections on May 15, 2022 in Beirut, Lebanon.

On the eve of Lebanon’s parliamentary elections last weekend, Resurrection Church of Beirut (RCB) called for a prayer meeting. The short meditation focused on Psalm 147: heal the brokenhearted and sustain the humble—but cast the wicked to the ground.

Three years ago, a massive popular uprising shouted “all of them means all of them” against the traditional sectarian parties. But within a few months, protests fizzled as COVID-19, the Beirut port explosion, and a World Bank-labeled “deliberate” financial depression drove many to despair.

For many, emigration seemed the only answer.

Hikmat Kashouh called out to God.

“Confuse many in the election booths, and encourage others,” prayed the RCB pastor. “Cause them to vote for those you desire.”

One of Lebanon’s largest evangelical churches, only 35 members from the main Baabda campus prayed along with him. The turnout mirrored that of the nation, which initially reported that participation dropped to 4 in 10 eligible voters. Very few expected significant movement in the political map.

“For three years we have cried out to God, reflecting his love as we ministered to everyone regardless of religion,” said Nabil Costa, executive director of the Lebanese Society for Educational and Social Development, also known as the Baptist Society. “And then at the fourth watch of the night, when everyone was losing hope, God said, ‘I am still here.’”

Most evangelicals, he said, supported civil society candidates associated with the uprising. From a total of one member of parliament (MP) in 2018, their number surged this week to 14 in the 128-seat body, which is divided equally between Muslims and Christians.

The ruling political alliance, anchored by the Christian-led Free Patriotic Movement (FPM) and the “Shiite Duo” of Hezbollah and Amal, lost its legislative majority. While the Muslim component maintained its grip on its 27-seat sect-based share, the FPM fell from 24 to 17 seats as other Sunni and Druze allies also lost ground. Its place of Christian leadership was partially taken by the Lebanese Forces (LF), which rose from 15 to 19 seats.

Voters choose between several often multi-party electoral lists in their district, with candidates distributed according to their sectarian affiliation. A preferential vote can be given to one person on the chosen list, regardless of sect. Candidates appeal to their co-religionists, but allied others can help them.

Christians, however, gave 30 percent more votes to LF than FPM.

Riad Kassis had previously supported one of them.

“For many years, they didn’t live up to their vision,” said the international director of Langham Scholars, a global ministry founded by John Stott. “Sincerity, though important, does not build a nation.”

Refraining from naming his prior allegiance in order to avoid polarizing his ministry, Kassis appreciated their love for Lebanon and stated commitment to reform. Others would be less generous and would label FPM and LF among the corrupt traditional parties.

But required by Lebanon’s arcane system to travel 45 minutes to his village of family origin, Kassis cast his vote for a pro-uprising list of change—yielding a Sunni MP. His victory, and that of civil society representatives elsewhere, he said, was “almost a miracle.”

It is akin to the Exodus, he said, escaping from years of bondage in sectarian rhetoric, mismanagement, and corruption. While they may lose their way a bit before reaching Canaan, he hopes the journey will not take 40 years.

It has already been three decades since the end of the civil war.

“Like in the book of Judges, without a king, everyone did what was right in his own eyes,” said the LF liaison to evangelical churches. “These new MPs may be a little like Saul, who could go good or bad.”

Lebanon’s 15-year conflict ended in 1990 with a political settlement that rebalanced the three sect-based centers of power: a Maronite Christian president, a Sunni prime minister, and a Shiite speaker of parliament. The system encourages consensus, but often produces gridlock.

During the 2019 uprising, LF ministers resigned from the cabinet in order to align with the protests. Positioning themselves on the side of change, the party is nonetheless rejected by many of the post-war generation as its head, Samir Geagea, was a militia leader.

But singled out for prison as other warlords divided the political pie, Geagea came out “clean,” said Moussa. In 2016, he made a deal with Michel Aoun, who as head of the army was his fierce Christian opponent during the civil war. But after granting him the presidency to end a two-and-a-half year vacuum, Geagea soured on the partnership as FPM increasingly gravitated toward Hezbollah.

With an Islamic orientation, their name means “Party of God.”

LF stands for secular national sovereignty, said Moussa, while the Shiite militia aligns Lebanon with Iran and Syria. In exchange for electoral support, FPM gives “Christian cover” to Hezbollah’s arsenal of weapons, considered “resistance” against Israeli aggression. LF sees it as a quid pro quo to protect corrupt politicians—and a threat to use against them.

Moussa expects the two ascending forces to form a cohesive parliament bloc, in the “same trench” fighting for political and economic reform. But he is wary that Hezbollah or others may pry them away, as they earlier did with the FPM.

“The new parliament will be welcomed by a catastrophe,” said the director of ShiBiFeed, an evangelical outreach to youth. “The economy was stable for a few months before elections, but this is a temporary illusion.”

Still officially pegged to the dollar, the national currency lost 90 percent of its value during the economic crisis. The central bank intervened for several months, but the lira plunged another 30 percent as electoral victors were being announced.

Joblessness has tripled since the crisis began, with 3 in 10 Lebanese now unemployed. Nearly 8 in 10 live below the poverty line, with 36 percent in extreme poverty.

But it may have been despair, paradoxically, that buttressed the fortunes of pro-uprising forces, Costa said. The primary Sunni leader boycotted elections, leaving a void. And while many ordinary citizens stayed home, it was the committed youth who remained dedicated at the polls.

The mindset is changing.

“The underdog mentality has replaced fatalism,” he said. “And instead of leaving, we’re fighting.”

Pleased with the results, he compared the new MPs to Nehemiah. Where the people once laughed, with unity, strategy, prayer, and humility, they can rebuild Lebanon—as the prophet once did for Jerusalem.

It was a position the FPM had in 2005, said Nicolas Haddad. Once an LF supporter, the Lebanese Cru leader flips the political Christian betrayal. The Cedar Revolution ended Syrian occupation, as Aoun and Geagea cooperated. But the latter then joined Sunnis and the Shiite Amal party to squeeze out the FPM, aligning Lebanon with Saudi Arabia.

“The uprising started out honest,” said Haddad. “But the LF jumped on board and turned it against the FPM, while the media joined the chorus.”

It is a “great achievement” they did so well, he added.

Now resident in Florida, Haddad was one of about 130,000 Lebanese voting from the diaspora—more than double the total from four years ago. Well aware of the American concern about Hezbollah, he wants to put the FPM alliance in context.

“Personally, I am not for their weapons, especially after they used them in Syria,” he said of the militia’s intervention on behalf of the regime. “But without them, does our army have the ability to defend us against Israel?”

Israel occupied Lebanon from 1985 to 2000, with a month-long war in 2006. The two nations dispute ownership of offshore natural gas reserves, adding to current tensions.

But FPM is likely to review its alliance, Haddad said. Since 2019 they felt abandoned as Hezbollah hewed more closely to Duo partner Amal, viewed by the Christian party as one of Lebanon’s most corrupt entities.

The approach toward Resistance weapons could be the crucial question facing new MPs—and all Lebanon. Some accuse activists in the pro-uprising movement of being soft on the Shiite militia; Hezbollah accuses them of carrying a US-Israeli agenda.

“They must navigate a very delicate line, said Martin Accad, founder of Action Research Associates (ARA). “It could split their ranks, and the traditional parties know this.”

Accad resigned as chief academic officer of Arab Baptist Theological Seminary in late 2020, after the Beirut explosion, to join his life of faith to the public square. ARA worked with emerging political leaders, but also the previous MPs who resigned from the parliament at the time of the uprising. At times called in to arbitrate disputes and facilitate collaboration, Accad said they have good relations with two-thirds of the new opposition MPs, two of whom participated in ARA training workshops.

If his advice is taken, they will not provoke the Party of God.

“The top priority of change MPs must be to build a strong state,” said Accad. “If their primary objective is to disarm Hezbollah, it will reinforce the stalemate and will likely lead to violence.”

The best strategy, however idealistic, is rebuilding Lebanon’s failed institutions, winning the trust of grassroots Shiites. This includes the provision of social justice, Accad said, something which aligns perfectly with civil society movements.

“It may be that God brought them here, for this purpose,” said Accad. “This is a unique chance in the history of Lebanon; we need prayer and wisdom not to miss it.”

Hope is high, but elation should be tempered. Sources said with no clear majority, there are no guarantees that polarized politicians can get anything done. This includes the next constitutional steps of electing a new speaker, prime minister, and president—let alone coming up with a plan to rescue the ailing economy.

In a late announcement, Lebanon revised the turnout figures to 50 percent.

But at RCB, Kashouh urged the three dozen faithful—and the many more praying in spirit. Cry out to God in repentance, he said, like the sinful woman who anointed Jesus’ feet with her tears. And no matter how corrupt Lebanon’s politicians may still be, remember the unjust judge.

“Even he responded to the pleas of the widow,” said Kashouh. “How much more will God’s heart be moved, when his children pray with persistence.”