Structuring the Church for Effectiveness

Structuring the Church for Effectiveness

The amount of life transformation you're seeing may depend on your answer.
Eric Swanson 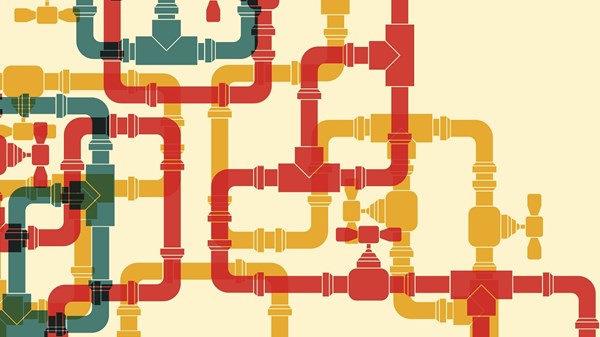 Churches today have three primary methods to connect with and grow their congregants.

First, churches can act as pipelines that grow congregants into disciples. Platform Revolution explains: “[A] pipeline is a business that employs a step-by-step arrangement for creating and transferring value, with the producers on one end and consumers at the other.”

Pipelines are designed for one-directional flow of product, service, or information—from producer to consumer. For example, the pastor studies the Bible for 10 to 20 hours a week, crafts a message and “delivers” the message to (hopefully) eager ears at the end of the pipeline on the weekend. Success is measured by how many people heard that message—in person, in a multisite venue, or online.

Here’s a second example of how churches act like pipelines. The leadership team designs the weekend service to stimulate, challenge, and educate those who attend on the weekend. Success is measured by how many people attend. This is not dissimilar to the way major networks produce our favorite programs (think The Voice, Modern Family, Monday Night Football) and deliver these programs to us on our various screens.

In church, our language—“delivering” a sermon, “producing” the service—provides clues we are using a pipeline model. Manufacturing is built around pipes and supply chains; and authors, speakers, educators all produce something at one end of the pipe hoping to deliver it to hungry consumers at the other end. But pipelines are good for transfer of information, not necessarily for transformation.

Churches have a second delivery system available. On the Internet, a portal is a website that acts as the entry point for browsing or searching the Internet. Sites like Google, Yahoo!, and Kayak are the doors we enter first to discover our myriad of options. Think of your last ministry or missions fair. Each ministry or nonprofit had its own candy-laden table, and congregants were encouraged to grab a donut and a cup of coffee and explore the plethora of opportunities. These fairs serve as portals to opportunity. Success was probably measured by the number of ministry partners who showed up and the number of congregants who walked through the exhibits.

Your church bulletin and weekly announcements also serve as portals. The phrases, “We trust you’ll find your place of service,” or “We encourage all the men to be there,” are characteristics of portal thinking. Portals encourage exploration, but not necessarily transformation.

The third model for churches is the platform. Tom Goodwin, senior vice president of strategy and innovation at Havas Media, writes of their power:

Each of these enterprises has discovered the power of platforms.

A platform has three entities—producers, consumers, and the platform infrastructure itself. Think of your local farmer’s market: it links producers with consumers, buyers with sellers, and likeminded people with each other.

Each of these enterprises has discovered what people wanted to do all along and enabled them to do it. Platforms don’t make things happen; they help things happen.

When I preach in different churches, I often begin my sermons by saying, “Who wants to change the world? Please raise your hand.” Almost every hand goes up. This is the latent energy that is present all around us. Everybody wants to make a difference. What “wants to happen” in your church? Could a platform approach capture that latent energy?

Every platform needs two things to be viable: design principles and tools.

For your church to design a platform, the most important question to answer is this: What is your one core interaction that you are trying to repeat and scale? Identifying your core interaction will determine what you measure. Try to think beyond increasing the number of people who listen to your weekend message. That is a good measurement for pipelines but not a good platform interaction.

When I talk about city transformation as a platform, the clearest repeatable, value-creating core action seems to be “one Christ-follower helping another person experience life more as God intended it—spiritually, physically, emotionally, economically, vocationally.” This would include sharing the gospel, discipling, mentoring, job creation, and other things. That's what city movements are trying to multiply and scale.

You might also think about your church being a “platform of platforms,” with each of your ministries serving as a separate “app.” Each ministry would need to define what one core interaction it is trying to scale and multiply.

At the end of the day, platform design is about turning passive hearers into active doers (James 1:22–25) who can quickly become contributors, influencers, and teachers (Ezra 7:10). Airbnb doesn’t have “page-views” as their measure of success, but rather “room nights rented.” They keep fine-tuning the platform to convert more and more of the lookie-loos into actual users. That is the core interaction they are scaling. There is no scaling without conversion from hearing or watching into doing.

Was there a core interaction that Jesus was trying to scale (Matt. 4:19, Luke 10:37, John 13:34, John 20:21)? What core interaction are you trying to multiply and scale? This is the most important action to define, without which there is no platform.

Andy Stanley at North Point Church in Georgia is learning to look past attendance and offering receipts to one core interaction: getting congregants into small groups. North Point believes that just getting people into small groups puts them on a moving sidewalk of growth and impact. They have defined what they want to optimize and scale. What about you?

Design Principle 2. Platforms must be designed so consumers can become producers with the least amount of friction. In platforms, producers and consumers are not people; they’re roles, and it is easy to shift between roles. Those who ride with Uber can easily start driving for Uber. Those who rent a room through Airbnb can easily rent out a room through Airbnb. Those who read something on Facebook can effortlessly produce something on Facebook. Can those who received the gospel share the gospel? Can those who are taught teach others? Can those who participate in service include others in service?

Digital platforms like Facebook, Instagram, and Twitter make it easy and likely for consumers to become producers through “co-creation.” Every time I hit the “Like” button on Facebook or write a comment, I make the original post, picture, video, or link a little more valuable and the “message” goes out to an increasingly wider audience (“Eric recently liked this”). Is there something congregants could do to co-create and spread to a wider audience what happens on a weekend, through their Life Group, after a day of service?

Sangeet notes that “in an increasingly urbanized world, it is the creative class who is moving to the cities of the world, so most people sitting in churches in urban areas are part of the creative class—creating is part of their job all the time. When they come to church, they are consumers. They are sitting, listening to something, and constantly consuming. Some may have different levels of responsibility, but rules are regimented and curriculum driven, preventing creative production. Members of the creative class are not used to stepping into an environment where they are mere consumers of someone else’s content. How could the church provide the tools and rules—non-regimented, non-strict—that enable every single participant to better leverage their creative abilities.” A church that equips members to live out their personal mission through business, the arts, education, public service, and other areas may reach and retain creatives.

A well-designed platform scales to benefit a greater number of people without significantly increasing costs to the platform. Instagram had a paltry 14 employees when it was bought by Facebook for $1 billion. WhatsApp had a mere 40 employees but was growing at a million users a day when it was acquired by Facebook for $19 billion.

Does your church’s plan for growth require additional staffing, or can you grow because “consumers” can easily become producers and help others?

Ideally platforms don’t do any “work” per se but create tools for people to do the great work themselves. The reason you have such an awesome Facebook page is not because you know HTML; it’s because Facebook has created tools for you to easily write your thoughts, post a picture or video, link to a Website, “like” posts, and comment on posts. Platform value is created as the users do the work. Twitter and Facebook are worthless unless users do the work of posting.

What “tools” could you create that make it easy for congregants to serve their neighbors and city—to live on mission? What if you stopped seeing your main job as doing work or motivating your staff to do work, and started seeing it as giving people tools to work--helping people missionally engage and have gospel conversations with those around them?

You’ve probably done this. When you had your last Serve Day or ShareFest, you created a “tool” for helping people live out their mission, converting intention into action. When you established online giving, you implemented a technology that helped people steward their money.

Dave Runyon and Jay Pathak (Art of Neighboring) created a refrigerator magnet (now posted on over 80,000 refrigerators) to help congregants identify the names of their eight closest neighbors. What other “tools” can you and your team create? Sangeet says, “The goal of the platform is to amplify the effectiveness and the outcomes of every single participant.” That’s how your church will thrive. Your role as the senior leader is to motivate people towards following Jesus and provide tools that make it likely and easy for that to happen.

In 2017 we celebrate a five-hundredth anniversary in the life of Martin Luther, who understood the power of giving people tools. The Bible then was read each week in Latin--a language few understood. Luther translated the Bible into the language of the people, so anyone could share in the priesthood of all believers. That tool enabled the revolution we call the Reformation. The world and church are primed for another revolution.

What if you or someone in your church took on the role as Chief Platform Architect? He or she would do three things:

2. Remove all bottlenecks to the core interaction.

Eric Swanson serves as a missional specialist with Leadership Network and as a content specialist with Gloo. He is the co-author of four books, including The Externally Focused Church and To Transform a City.

Subscribe Now
Already a subscriber? Log in
Read These Next
expand
Give Today
Christianity Today strengthens the church by richly communicating the breadth of the true, good, and beautiful gospel.
Learn more
© 2020 Christianity Today - a 501(c)(3) nonprofit organization.