How does a lonely kid understand that she’s loved by God? An author’s childhood holds the answer.
Sarah Arthur 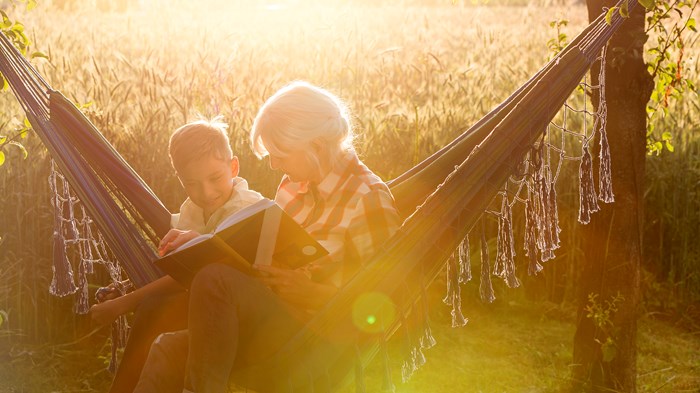 Story, at its heart, is one of the primary modes in which God speaks to us, which means it’s one of the main vehicles for God’s truth. It’s also formative truth: The best, most ennobling stories have the power to shape our actions and play a vital role in moral and spiritual formation. “Rather than taking the child away from the real world,” wrote Madeleine L’Engle, author of A Wrinkle in Time, “such stories are preparation for living in the real world with courage and expectancy.”

In other words, our faith is formed not just by propositional truths but also by the narratives of Scripture, the tales of Christian history, the great works of fiction, and other art forms. L’Engle’s own childhood was steeped in story and offers us a model for the power of moral imagination on the life of faith.

In writing about her growing up years, L’Engle claimed that “the greatest gift my mother gave me, besides her love, was story. She was a wonderful storyteller, especially about her childhood in the South. . . . ‘Tell me a story,’ I would beg, and my mother would take me in imagination back to her world so different from mine.”

Before leaving for the opera, her mother would pause at bedtime and give L’Engle a bit of herself, a memory to treasure. Those stories significantly shaped her sense of family identity and sometimes later resurfaced, fictionalized, in her novels. As a child, they helped her feel less alone.

At boarding school she was miserable and even “psychologically abused” by inept and cruel teachers, which is why, “possibly as a defense against the troubled, everyday world of my childhood, for nourishment I learned to rely more and more on the private world that I discovered in books.” Madeleine’s maternal grandfather, who lived in Europe, regularly sent her English children’s literature. Books by E. Nesbit (The Railway Children), Frances Hodgson Burnett (The Little Princess, The Secret Garden), and Kenneth Grahame (The Wind in the Willows) all nurtured her imagination, along with the Scandinavian fairy tales of Hans Christian Andersen and works by North American authors like L. M. Montgomery.

“I’m particularly grateful that I was allowed to read my Bible as I read my other books,” she wrote in Walking on Water, “to read it as story, that story which is a revelation of truth. People are sometimes kept from reading the Bible itself by what they are taught about it, and I’m grateful that I was able to read the Book with the same wonder and joy with which I read The Ice Princess or The Tempest.”

Her engagement with these books—Scripture included—was deeply formative. They nourished “the same hunger in me, the hunger for the truth that is beyond fact, the hunger for courage and hope in a difficult world, the hunger for something more than ordinary vision.”

The one author who not only cultivated that hunger but fed her solid spiritual meat was the 19th-century Scottish minister and writer, George MacDonald. Author of At the Back of the North Wind and The Princess and the Goblin, among other fairy tales, MacDonald saw storytelling as a moral enterprise. He wrote, “In physical things a man may invent; in moral things he must obey—and take their laws with him into his invented world as well.”

By this vision, the storyteller is not, ultimately, the source of storytelling: God is. Furthermore, according to MacDonald, we cannot avoid accountability to the original Storyteller for the moral universe he has created.

However, that doesn’t mean we bludgeon our readers over the heads with overt statements of Christian belief. MacDonald wrote in his essay “The Fantastic Imagination,” “The best thing you can do for your fellow, next to rousing his conscience, is—not to give him things to think about, but to wake things up that are in him; or say, to make him think things for himself.” For a preacher, this was particularly hard; MacDonald, throughout his fiction, seemed unable to occasionally refrain from sermonizing. But his chief desire was that “if there be music in my reader, I would gladly wake it.”

And wake, it did. C. S. Lewis, for example, was in his teens, already an avowed atheist, when he picked up MacDonald’s Phantastes at a train station sometime in 1916 and, a few hours later, knew he had “crossed a great frontier.” What it did to him, Lewis claimed, “was to convert, even to baptize ... my imagination.” The conversions of his conscience and intellect were to come much later, but the initial experience of “goodness” or holiness in the story—and the longing that it sparked in him—was the first catalyst for transformation. Lewis would go on to credit MacDonald for influencing everything from his understanding of heaven to his trust in the great love of God.

The same was true of L’Engle. In a little-known essay on the topic titled, “George MacDonald: Nourishment for a Private World,” she described how MacDonald shaped her understanding of God. MacDonald depicted God as “a loving Father who knows that sometimes ‘No’ is the only possible answer of Love, a Father who can be trusted, who understands laughter and tears, a Father who is nothing like the stern, Victorian image.”

She also celebrated MacDonald’s depiction of “wise women” such as the North Wind in At the Back of the North Wind, and the great-grandmother in The Princess and the Goblin, both of whom serve as mysterious, occasionally frightening, mentors and guides, much like the Holy Spirit.

Through encounters with stories like these, the imagination can play a vital role in spiritual formation. Without it, we can’t visualize the ancient world of the Scriptures; we can’t grasp the metaphors of Jesus’s parables; we can’t practice empathy by seeing things from someone else’s perspective, nor picture the people we’re interceding for in prayer. We can’t trace a pattern of meaning in the events of our lives, and we can’t dream a better dream for the future God has in store. Someone might give us all the knowledge and information there is to know about Jesus, but it takes the Holy Spirit at work in the imagination to connect the dots to our real lives on the ground.

“Madeleine gave us the language to value imagination,” says Makoto Fujimura, visual artist and author of Culture Care. “That gift resonates in the gap between art and religion, but also for society at large.”

So how does a lonely child come to understand that she is uniquely loved by God? That she, like each of us, matters? Through stories, L’Engle asserted. Through the writings of authors like George MacDonald. Through the kinds of books that she, herself, would go on to write one day.

Sarah Arthur is the author of over a dozen books on the intersection of faith and literature and serves as a preliminary fiction judge for the Christianity Today book awards. Her latest book is A Light So Lovely: the Spiritual Legacy of Madeleine L'Engle. Find Sarah on Twitter @HolyDreaming and on Instagram.