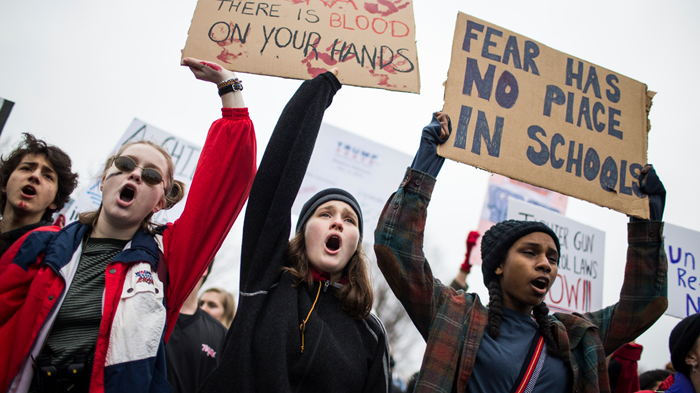 One of the defining characteristics for today’s teens—who have grown up in a constantly connected, socially evolving world—is their desire for “safe spaces,” settings where they can expect inclusivity without fear of judgment.

In recent weeks, in the wake of the latest school shooting, we’ve also seen this generation speaking out for literal safe spaces.

The youth movement against gun violence reflects broader desires for safety and risk aversion among Generation Z—some of the characteristics making them distinct from even the millennials of the previous decade.

This aspect of the Gen Z worldview often gets maligned by older generations, who sometimes dismiss safe spaces and trigger warnings as a result of an oversensitive “snowflake mentality.” However, youth leaders increasingly see the motivations beneath these values—care for others and compassion to understand others’ experiences—as significant for Christian ministry.

News coverage around the Parkland, Florida, shooting has shown us a new dimension to America’s youngest generation. Instead of viewing students through the lens of their social media dependency or pop culture proclivities, we saw them making headlines for challenging lawmakers on gun policy, speaking out on issues that matter to them, and rallying peers to their cause. (True to their stereotypes, Snapchat and other social media have played a significant role in this wave of activism.)

The current attention drawn to America’s youth gives church leaders an opportunity to better understand their motivations, fear, and convictions and prepare to address relevant issues in youth ministry settings as well.

“Generation Z values the feeling of security and are much more risk-averse than previous generations,” said Ben Trueblood, director of student ministry for LifeWay Christian Resources. “I think this is reflected clearly in their response to this incident, not only from the Parkland students but from students across the country who are reflecting on their own schools and processing what it would be like if it happened to them.”

“In the church, we need to know this and work hard to provide safe environments not just from gun violence but from abusive situations as well,” he said.

In a detailed report on Gen Z released in January, Barna Research found that the vast majority of youth pastors said their teens regularly bring up difficult moral questions. In all, only about 1 in 10 said they struggled to get teens to talk about complex issues (12%) or go deep on topics that matter (10%).

As some of the young activists pointed out, those born after 1999—nicknamed Generation Z or the “iGen”—grew up after the Columbine massacre; they were raised knowing the dangers of the modern world and trying desperately to avoid them.

“People usually don’t think of teenagers as risk-averse. But for iGen, it’s been a central tenant of their upbringing and outlook,” she wrote for The Conversation. “During their childhoods, they experienced the rise of the helicopter parent, anti-bullying campaigns and, in some cases, being forced to ride in car seats until age 12. Their behavior has followed suit.”

Recent studies have already begun to show how Gen Z has shifted away from much of the “risky” behavior that plagued generations of youth before them.

Measures like binge drinking, drug use, partying, sex, and teen pregnancy have all fallen in recent years, and the high schoolers of today are even less eager to reach traditional measures of adulthood and independence like driving, noted Danny Huerta, Focus on the Family’s vice president of parenting and youth.

“There’s a discomfort with risk-taking and an overabundance of a pursuit toward happiness,” he said. “I don’t think they’ve been able to really process or accept pain.”

These attitudes represent “more of an opportunity for the church than a challenge,” according to Kara Powell, executive director of the Fuller Youth Institute.

The compassion and passion among teens, whether for their peers or bigger issues, can relate directly to the Christian teachings being presented in youth groups and Bible studies. When youth express the desire for acceptance or their fear of judgment, hurt, or violence, adults have the opportunity to introduce the body of Christ as the ultimate safe space for them.

“Think about how Jesus responded to people. He made people feel safe and then he made them change radically,” said Powell. “We just need to introduce these radical, countercultural teachings of Jesus, who led with love as a front door.”

Some might fear that Gen Z sensitivities would keep youth from speaking out to defend challenging or unpopular beliefs. In some situations among teens, “if a Christian states their faith, they are seen as mean and judgmental or ‘haters,’” said Huerta.

But even such pushback hasn’t dampened personal convictions. Teens who are actively involved with church and their faith (a category Barna calls “engaged Christians”) are as likely as older Christians to hold to their convictions. Two-thirds of engaged teens and adults alike don’t believe their beliefs are wrong just because they may offend or hurt others, the researcher found.

Both Powell and Trueblood encouraged older generations to ask questions and encourage teens to tell them more, rather than leading with lectures or ready-made lessons.

“We know that the answer to hurt, to sin, to tragedy is Jesus, and we have to be clear about that while understanding that this generation of teenagers responds better to the gospel through conversation… rather than a one-sided presentation where we are trying to tell them how they should think and feel in moments like these,” Trueblood said.

In the aftermath of school shootings in other tragedies, Fuller Youth Institute urges adults to offer a sense of safety to youth—inviting them to voice questions and frustrations.

“We may fear taking students to those places of doubt, anger, and disappointment with God. However, failing to create an environment for authentic lament can result in spiritually and psychologically short-circuiting the necessary healing process,” Powell wrote. “We have the opportunity to offer the hope of Christ and his re-orienting power to lives that have been plunged into trauma and disorientation.”