PAX TV off the Ground

by Steve RabeyOctober 5, 1998
This article is from the October 5 1998 issue. Subscribers can read all of CT's digital archives.

Viewers fed up with televised sex, violence, and crudity have a new alternative. PAX TV launched its slate of "pro-family" programming August 31, immediately becoming the nation's seventh national over the air network.

Network founder Lowell "Bud" Paxson, 62, has been buying up broadcast rights to shows such as Touched by an Angel, Promised Land, and Dr. Quinn, Medicine Woman. Meanwhile, he has purchased 86 television stations. That, along with deals negotiated with cable companies, means PAX TV (the name has been changed from the original PAX Net to avoid confusion with the Internet) is available to nearly three-fourths of American TV viewers.

"Frankly, when I look at the deluge of trashy programming that's flooding the market today, I don't believe for a second we can fail," he writes in his new book, Threading the Needle (HarperBusiness).

But Paxson, who cofounded the Home Shopping Network and is based in West Palm Beach, Florida, believes he will have another reason for success.

"This is very highly God-driven," says Paxson, who experienced a dramatic Christian conversion in 1986 after years of pursuing deals at the expense of his family (CT, April 27, 1998, p. 20).

As Paxson sees it, "Each of us has three threads, or elements, of life we need to get through the needle's eye: the business or career thread, the spiritual thread, and the family thread."

In PAX TV, Paxson says he has found a formula that combines all three: a profitable business that gives families positive TV alternatives while "planting the seed that God loves us." But don't dare call his network "Christian TV."

"Christian television stinks," he says. "I think Touched by an Angel does more for the kingdom of God than all of the televangelists combined."

PAX TV off the Ground

PAX TV off the Ground
expand
hide this 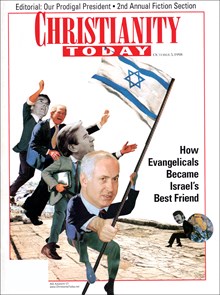 This article is from the October 5, 1998 print issue. Subscribe to continue reading.