Combining mainstream appeal with spiritual depth, Jars of Clay is shaking up Contemporary Christian Music.
by Randall BalmerNovember 15, 1999
This article is from the November 15 1999 issue. Subscribers can read all of CT's digital archives.

On a pleasant July evening in western New York, two distinct groups of people file into the open-air amphitheater just up the hill from Lake Chautauqua. The denizens of the Chautauqua Institution—founded in 1874 to train Sunday-school teachers—are overwhelmingly white, elderly, upper middle class, and terminally addicted to learning and the arts. During most nights of the summer season, after a full day of lectures and symposia, Chautauqua offers a performance of some kind at the pavilion—ballet, Chautauqua's own symphony orchestra, or, as on this night, an outside musical group. Residents and visitors are accustomed to wandering in the direction of the pavilion after supper to locate friends and sample the cultural offerings.

The other constituency on this summer evening clearly had been looking forward to tonight's performance, by a band called Jars of Clay, for some time. A group of high-school and college-age students congregated in the orchestra section and, in anticipation of the concert, executed a call-and-response cheer that has become commonplace at Christian music concerts: "We love Je-sus! How about you?" The other side answered: "We love Je-sus, too! How about you?" Some of the older folks, looking up from their books or news papers, seemed a trifle befuddled by this uncharacteristic outburst of religious enthusiasm.

A few minutes after eight the orchestra section began a rhythmic clapping. Machines blew artificial smoke across the stage. The orchestra section rose to its feet, and those in the out lying seats again looked up from their reading. The main event took the stage and opened with "Liquid," the first song on its debut, self-titled album, Jars of Clay. The music was loud, but there was ...

Hymns on MTV
expand
hide this 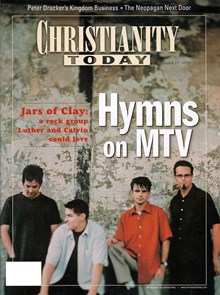