By Gordon Govier.October 25, 1999
This article is from the October 25 1999 issue. Subscribers can read all of CT's digital archives.

"I don't understand how you can be both a Christian and a journalist," Ben Weir told fellow hostage and former Associated Press correspondent Terry Anderson during one of the long days of their six-and-a-half years of captivity at the hands of Lebanese terrorists.

"It's sometimes difficult but not impossible," Anderson assured 150 Christian journalists from 30 countries who gathered on the campus of University College in Chichester, England, August 1921. The conference was the first meeting of Gegrapha, an international fellowship of Chris tian journalists, founded by former Time magazine dip lo matic correspondent David Aikman (CT, Oct. 26, 1998, p. 20).

"You cannot be a Christian and a bad journalist," Anderson added in an address entitled "Forgive Us Our Trespasses." Acknowledging that even small truths can sometimes do large damage, Anderson said journalists should take responsibility for their work.

One journalist whose faith drives her work is Jennifer Arul, South India Bureau Chief for New Delhi Television. She reports on "dowry deaths"—women who are killed for failing to bring large dowries to their new family—when other journalists ignore the topic. Her media coverage has led to public outcries, which often force authorities to investigate when some would prefer they look the other way.

Kelly, between postings to Kosovo and Turkey, brought along the bullet-proof vest that is necessary on many of his assignments. "I'm convinced there's Somebody who's watching over me," he said. Gegrapha, Greek for "I have written" (John 19:22), aspires to connect ... 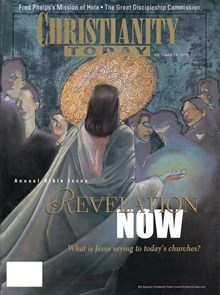 This article is from the October 25, 1999 print issue. Subscribe to continue reading.