Communist leaders invite even Christians to help the poor
Tony CarnesNovember 1, 2003
This article is from the November 2003 issue. Subscribers can read all of CT's digital archives.

The emaciated boy moved along the stalls of street vendors in the northern city of Xian. Furtively retrieving scraps of food, bark, and grass, he looked like a spinning scarecrow. As the boy stood up in a patch of light, people could see he was clad only in dirt. His eyes were blank. Locals call him the "naked boy beggar."

Even in an increasingly prosperous China, the beggar boy is one of millions of poor people. The government, recognizing that it can only do so much, is contravening a long-term policy. It is opening the door to a genuinely private social service sector to help alleviate the suffering.

An estimated 150 million Chinese have been lifted out of poverty in the last decade, but millions of others have been thrown into it. Though the country's gross domestic product has doubled since 1978, the government has let go millions of workers who were part of money-losing, state-owned enterprises. In addition, many peasants are heading to the cities, where there are not enough jobs and social services.

In Shaanxi, the northern province in which the beggar boy forages, perhaps 20 percent of the population suffers from malnutrition, according to the International Labor Organization. There are around 100 million immigrant laborers—also known as "floating people"—and 30 to 40 million poor people in urban China, according to a Chinese government think tank.

Such figures concern the country's communist leaders, who these days prize social stability over communist ideology. Carol Hamrin, a longtime China watcher, said China's government has reason to be concerned.

"There is a lot of anger," she told CHRISTIANITY TODAY. "Social tensions are increasing with rapidly growing income disparities, which likely will surge in the next five ...

About-Face on Charities
expand
hide this 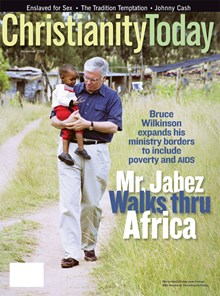 This article is from the November 2003 print issue. Subscribe to continue reading.