A sliver of hope for Christian women who suffer beatings, rape, and forced conversions to Islam.
by Deann AlfordJune 1, 2004
This article is from the June 2004 issue. Subscribers can read all of CT's digital archives.

For some reason, Maria's hands and feet had not been tied by her husband, Mohammed, before he left the house. And none of Mohammed's family was home—only her year-old son, Joshua, who whined for milk. So the pregnant 20-year-old Christian found 10 rupees and set out with the boy to buy some.

It was the first time in almost three years she had stepped out of the house in northeastern Pakistan. In December of 1997, her Muslim uncle had sold her to Mohammed for $1,400—without ever telling her immediate family, she later found out. Since then, she had endured daily beatings from Mohammed and his family. As she stood alone on the street, she forgot about the milk. Instead, she boarded a bus headed for her home city. Maria then realized she didn't have enough money to pay the fare and began to cry. A stranger paid her fare.

Maria found her family, who were at first overjoyed to see her. Three years earlier, they had tried to file a missing persons report, but since they refused to pay a bribe, the police took no action. Maria told her parents and brothers about the brutality she had endured and her forced conversion to Islam. She also explained that her husband had changed her name.

Though she never personally embraced Islam, Pakistani society considered her Muslim, and the men in Maria's family knew they could suffer reprisal for sheltering her. So they told her she had to leave. Frantically searching for help, Maria's mother learned of a Pakistan-based Christian organization, the Centre for Legal Aid Assistance and Settlement (CLAAS). Maria presented herself to the organization's social workers, who immediately found her space in its Christian women's shelter. In a few weeks, CLAAS lawyers began filing for divorce on her behalf. ...

The Secret Shelter
expand
hide this 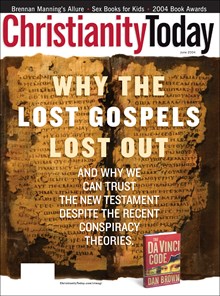 This article is from the June 2004 print issue. Subscribe to continue reading.