Looking back at the best films of Ronald Reagan.
by Mark Moring|June 9, 2004

I must confess, I've never watched one of Ronald Reagan's movies beginning to end. I caught the last half of Knute Rockne All American on TV one night—including the famous "win just one for the Gipper" line—but the former President's recent death will have many of us seeking out some of his old films for the first time.

But the man made 59 movies, so where does one even begin? I started with the Internet Movie Database, where its 18 million-plus users rate films. In other words, I went looking for fan favorites, not necessarily critics' favorites. (As it turns out, the fans like pretty much the same ones the critics like.)

One observation before I get to the list: You would think that the man who would ultimately be the Leader of the Free World might have also been at least a leading man in Hollywood. And sometimes, he was—but many of those movies were busts.

Reagan's greatest strength, according to a recent article in Entertainment Weekly, was as a supporting actor, which required him to be "sturdy and dependable." As EW noted, Reagan might've been best in roles that helped other actors shine. And come to think of it, as President, he made those around him—in the Oval Office, in Washington, across the nation and, indeed, around the world—better. The end of the Cold War—and the fall of communism—is proof enough of that. May he rest in peace.

So, based on what movie fans are saying, here are five Ronald Reagan films worth checking out:

In what critics say is his finest performance, Reagan plays Drake McHugh in this Golden Era tragedy based on Henry Bellaman's controversial, best-selling epic novel about cruelty and mental instability in small-town America. Reagan and ... 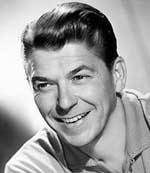