I'll get to the use of magic and sorcery in a moment, but first Kruger. The Skeleton Key is pretty much what you would expect from the screenwriter of disappointing films such as Scream 3, Reindeer Games and Arlington Road—a sometimes taut, somewhat compelling film hurt by a predictable and convoluted plot, and a big "gotcha" ending that really doesn't get ya. Kruger is a poor man's M. Night Shyamalan. In The Sixth Sense, M. Night revealed a key detail in the shocking ending that made the rest of the movie seem smarter. But Kruger's rarely surprising story twists typically make the rest of each film seem dumber. In the case of The Skeleton Key, Kruger's ending is so derivative that if I were to mention the name of a thriller released a few years ago, you'd know almost exactly how the film ends.

But that's not to say the film doesn't have any strengths. Despite thriller clichés and predictability, it's interesting for much of its running time, thanks to a handful of superb scenes, some natural laughs and suspense and strong performances. Skeleton Key tells the story of young New Orleans hospice worker Caroline Ellis (Kate Hudson) who takes a job as the live-in nurse for Ben Devereaux (John Hurt), an elderly man paralyzed by a stroke. From the get-go, there is something weird about the old Southern plantation house Ben shares with his bossy and demanding wife Violet (Gena Rowlands). As Caroline investigates the bizarre goings-on in the house and around Ben's illness, she unveils a weird history of sorcery and ... 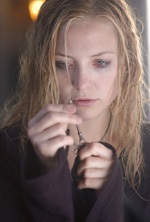