Palestinian director Hany Abu-Assad's new film—fictional, but true to life—follows the journey of two young suicide bombers. What motivates them? Abu-Assad says it may be more than meets the eye.
interview by Stefan Ulstein |November 8, 2005

Paradise Now, opening in limited release on November 11, is the fictional but true-to-life story of two young Palestinians who ask to be sent together on a suicide-bombing mission in Israel. Saïd and Khaled have been friends forever, and to them, it seems only natural that they would arrange to die together. Languishing in dead-end jobs, they are trapped in limbo, where the future promises only more of the same soul-killing monotony and humiliation.

Palestinian director Hany Abu-Assad, 43, says the film's title is meant to be ironic. Whether the friends truly believe that they will reach paradise is questionable. Their motives are obscure, even to themselves.

Abu-Assad, who has lived in Amsterdam for about 20 years, is a powerful presence, passionate about his subject. He fills the room with his energy and intelligence. In this interview with Christianity Today Movies, he revealed a warm, self-deprecating sense of humor and a disarming generosity of spirit. He holds strong opinions, but he favors discourse and dialogue over pontification and propaganda.

Paradise Now is being released in 45 countries, including Palestine and Israel. For a list of cities showing the film, go to the official website and click "Local Release Dates" at the bottom.

In the U.S., we get a one-dimensional view in our news about Palestine. Suicide bombers are often portrayed as if they were all the same, but your film shows two very different young men.

Hany Abu-Assad: The worst thing you can do in cinema is stereotyping. Why should I watch it? I know it already. It does not allow you to be surprised.

Tags:
None
Posted:
November 8, 2005
More From: interview by Stefan Ulstein 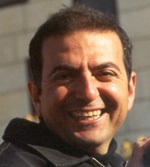