A good storyteller, like a good magician, knows that the audience wants to be fooled, at least while the show is in progress. In the end, we may or may not want to know the truth—for the truth, once revealed, may come either as a revelation or an anticlimax. But while the performance unfolds, we want the illusion, want to be taken out of the real world. Once we see through the story or the trick, the spell is broken, and we're back in the real world.

A moody, atmospheric fairy tale, The Illusionist is the story of one illusionist—Eisenheim, a fictional turn-of-the-last-century magician—being told by another, writer-director Neil Burger (Interview with the Assassin). By the film's end, the viewer knows the truth about some of Eisenheim's illusions, and some of Burger's as well. Some viewers may see through the plot's central illusion early on; others may be as fooled as most of the characters. On a fundamental level, though, The Illusionist succeeds: While the storytellers are at work, the spell holds.

Based on the Steven Millhauser short story "Eisenheim the Illusionist," Burger's film tells the story of an unflappable, charismatic magician named Eisenheim (Edward Norton) in pre-WWI Vienna. Like a method actor who stays in character off the set, Eisenheim maintains a quiet, commanding presence on or off the stage, an inscrutable sense of knowing more than he lets on, as he plays a dangerous game of wits with the heir to the Austria–Hungary monarchy, the Crown Prince Leopold (Rufus Sewell), and with Leopold's favorite among the police, chief inspector Uhl (Paul Giamatti).

The sparks begin to fly when Leopold, attending one of Eisenheim's performances, volunteers his paramour, the Duchess Sophie von Teschen ... 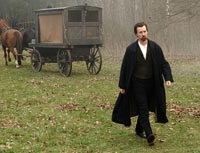