Steve Oedekerk, the writer/director/producer of Barnyard, might be one of Hollywood's funniest guys. For Oedekerk, a Christian, it's all about the joy of making people laugh.
by Mark Moring|August 1, 2006

It's not every day you talk to a guy who once thought it'd be really funny to have a sweat-soaked, half-crazed naked man squirm out of an artificial rhino's rear end.

That guy would be Steve Oedekerk, the writer/director/producer of Barnyard, which opens in theaters this week. The family-friendly animated film stars a carefree cow named Otis who eventually learns some valuable life lessons about responsibility and growing up. 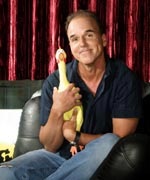 Barnyard features all sorts of "party animals," but no fake rhinos, a la the bizarre but hilarious scene described above from 1995's Ace Ventura: When Nature Calls, written and directed by Oedekerk and starring his good friend, Jim Carrey, in the title role. (Oedekerk and Carrey had met while working together on the TV series In Living Color, and later together in Bruce Almighty, starring Carrey and co-written by Oedekerk.)

"Wacky" is perhaps the best way to describe Oedekerk's varied career, which essentially with his reputation as the class cut-up as a schoolboy. He later became a stand-up comic before moving on to TV and film as a writer, director and producer behind such movies as Bruce Almighty and next year's sequel, Evan Almighty, plus Patch Adams, both Nutty Professor flicks, and Jimmy Neutron: Boy Genius.

On the side, Oedekerk, 45, is also known for Thumb Wars, a hilarious Star Wars spoof with all of the characters played by thumbs—just one of several similar projects starring that indispensable digit—and for such humorous cult classics as Kung Pow: Enter the Fist and steve.oedekerk.com, aka The O Show.

Behind all the silliness is simply a lifelong desire to make people laugh. Oedekerk, a Christian, loves nothing more than seeing—and hearing—that end result … and he did quite a bit of laughing himself during our recent conversation.

So, Barnyard is basically about an animal who likes to party, make people laugh and refuses to grow up. Sounds like your life story!

Steve Oedekerk: It's alarmingly close! But it wasn't really intended that way. It started with just the concept long ago with an idea I had, where animals stand up on two legs when humans aren't around, and they talk and have their own secret life. And when I started writing the story and delving into the characters, I realized, Wow, this is like a story about me and my dad … and probably a fairly common story for a lot of kids.

Your idea of animals on two legs with secret lives sounds a lot like some of Gary Larson's "Far Side" cartoons.

Oedekerk: Yeah, but mine started about 20 years ago at a friend's house. I was sitting in a chair and talking, and their dog was staring at me, unrelentingly. It was so weird and so human. When I walked out of the room, the dog tracks me the whole way while I leave. And for whatever reason, I just pictured him standing up on two legs and going, "Man, I'm glad that guy's gone." And then he strolls over to the cat and they go back to playing poker.

All I can tell you is that image rode with me for years, well before I had a movie career. But I kept thinking, There's probably a film in this. And then every time a movie came out with animals, I would panic: Gosh, I hope it's not my idea.

So, how do we get from that weirdness to a story that you say is about you and your dad?

Oedekerk: When I was writing the characters, I realized about halfway through the script that it was sort of about that. Because I was like Otis: When you're young and you just want to goof off and not take on responsibility, there's this friction between you and someone who's trying to pound into your head, "No, you have to grow up and get a real job!" But I wanted to do comedy!

Otis the cow, like Oedekerk, just wants to have fun

But there was always this core of love and respect within those arguments. And I think you'll see that in Barnyard, because even as Otis fights with his father, there's really a sense that they love each other.

And then there's the fact that Otis is adopted, like me. None of this was intended; it just sort of worked out that way. But yeah, it makes a statement of what is family, really.

So, it's a movie kids should really relate to.

Oedekerk: Yes, but not just kids. I think a lot of Christians will relate to it too, because we all reach a point where God reaches in, where you start noticing your actions more and the conscience gets a little louder. That's really what Barnyard is about—that moment where you have a decision to make as to which road you're going to take. And, if it comes through as intended, it's sort of like the fun that you think you're going to lose by taking responsibility and caring about other people, is actually replaced with something much grander. It's more of a joy; the fun doesn't really leave, but it gets enhanced and expanded. That's really what the storyline is ultimately about.

You've come a long way since Ace Ventura! But humor, and outright silliness, is still much a part of you and your projects. Apparently being a serious Christian doesn't mean kissing silliness goodbye!

Oedekerk: Well, I hope not, because if so, then something would be broke with me, because I am both. That's a part of me that can never be driven out, this childlike element. You can see it in my more eclectic than normal career. I'll go from a Patch Adams to doing our little Thumbs projects to Bruce Almighty and now Barnyard. All I know is there's all these different parts of my brain that are just sort of shouting out, "Oh, do this! Do this!"

I'll pray about stuff, and the only rhythm that I've grown to follow is, if something feels like I should be doing it, then I do it—and I think there's credit and credibility in both. Personally, it's really cool working on something like Barnyard. It's like Bruce Almighty in that there's a wide range of tones; you can have really silly, funny, and over-the-top, but the project is surviving on something that is actually a very nice point.

I've always enjoyed things that just make you laugh. If there's not a mean energy in it and it's generally got a positive tone and it's just silly, I think it's great. It's great when people just laugh. It's the same thing I did disrupting school as a kid. The point wasn't to disrupt school; it was to get the laughs.

Things of faith come through in movies like Bruce Almighty and I'm assuming it will in Evan Almighty. Are you planning any more projects where faith is addressed?

Oedekerk: I'm always listening to God in terms of where I should go and what I should do. So I have my plans, but I'm always open to changing them. But for the way I work now, I don't tend to bonk anybody over the head with faith. With Bruce Almighty, I was very happy with the way that movie landed. It was something where people are going to have a nice fun time out, but then, Christian or non-Christian, you're still witnessing the core of the growth of a man. That was somebody who went from completely selfish, the exaggerated version of all of us, to selfless in a period of an hour and a half. And people like it. That's probably the level I would think that I'm at. 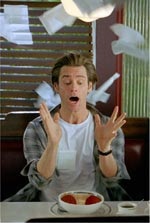 Jim Carrey was God for a day in 'Bruce'

I don't fancy myself extremely knowledgeable about God and Christianity to the point where I would be capable of instructing or preaching. But like all humans, just having a sense of right and wrong and good and goodness is nice. It's nice for people to get the double whammy, be able to go out and have a very nice time with the family and still walk away with something that makes you feel good.

Bruce Almighty had some great themes of faith, but it wasn't a movie for young kids. I'm guess Evan Almighty won't be either?

Oedekerk: Evan is closer to being a family movie, actually. Tom [director Tom Shadyac, also a Christian] and I first met on Ace Ventura: Pet Detective [Oedekerk was a "project consultant"]. That movie was a mistake in terms of tone, because we didn't know Jim was going to become like this icon for 5-year-olds. But that movie is completely inappropriate for kids; it's like a heavy PG-13. So in the second Ace Ventura [which Oedekerk wrote and directed], even though it's still wacky crazy, you just won't find as many off-color things in it, because we realized that kids are going to watch this, and parents are going to let their kids watch this. We had to be more responsible there.

And even though Bruce Almighty generally has a wonderful heart to it, yeah, when I wrote Evan I catered it much more to knowing that everyone was going to let their kids watch this movie. Because quite frankly, I think I'm the only dad who doesn't let my kids see PG-13 movies. So they've never seen Bruce Almighty.

Are you saying Evan is going to be PG?

Oedekerk: I think Evan has got to be PG at the heaviest, because we kept it more of a family movie.

Getting back to Barnyard. Some people think animated movies are just for kids. Do you want to dispel that myth?

Oedekerk: Well I'm a big one on not judging the people that see films. So whatever anyone's take is on Barnyard, I'm completely content with, because I really try to get something to a point where I think it matters—and then I let it go. So all I can tell you is the intent. The intent is a movie that anyone can sit down and enjoy. I didn't set out to do the writing any differently, other than the fact that we're a PG family film, so I kept everything extremely kid-friendly. But I didn't lower the sights down in terms of the age of someone who could watch it; I didn't make a kiddy film. There's enough big themes—adoption and family and these elements—that could be in any live action film I would do.

1 of 3
Steve Oedekerk, party animalOtis the cow, like Oedekerk, just wants to have funJim Carrey was God for a day in 'Bruce'