War on the Weak

Eugenics has made a lethal comeback.
Charles Colson with Anne MorseDecember 4, 2006
This article is from the December 2006 issue. Subscribers can read all of CT's digital archives.

In brightly lit hospital operating rooms, crowded nursing homes, busy research labs, and doctors' offices, an unannounced, lethal war is being waged against the weakest of the weak: handicapped infants, the elderly, and humans at the embryonic stage of life.

The opening shot in this war was fired when the modern eugenics movement came into fashion some 80 years ago. The first targets were the "feebleminded" and people of the "wrong" race. Leading scientists in the early decades of the 20th century, enamored with Darwin's theories, became eugenics advocates. Historian Richard Weikart, in From Darwin to Hitler: Evolutionary Ethics, Eugenics, and Racism in Germany, writes that while Darwin wasn't the first to argue that the strong and healthy have higher value than the weak and sick, or that some races are inferior, he provided a scientific foundation for those beliefs.

Some scientists actually compared the mentally ill to apes. Textbooks reported allegedly scientific findings that Africans, Native Americans, and Australian aborigines were subhuman. The eugenics movement brought about the sterilization of thousands of supposedly "inferior" people.

Even the U.S. Supreme Court weighed in. Among the most enthusiastic proponents of forced sterilization was Supreme Court Justice Oliver Wendell Holmes, who wrote in Buck v. Bell (1927) that "it is better for all the world" if "society can prevent those who are manifestly unfit from continuing their kind. … Three generations of imbeciles are enough." Holmes's third generation of "imbeciles" was a woman named Vivian Buck, who was no such thing—nor was her mother. As Harry Bruinius documents in Better for All the World, determinations of "feeblemindedness" and "imbecility" were ...

Charles Colson
Charles Colson was the founder of Prison Fellowship Ministries, an outreach to convicts, victims of crime, and justice officers. Colson, who converted to Christianity before he was indicted on Watergate-related charges, became one of evangelicalism's most influential voices. His books included Born Again and How Now Shall We Live? A Christianity Today columnist since 1985, Colson died in 2012.
Previous Charles Colson Columns:

War on the Weak

War on the Weak
expand
hide this 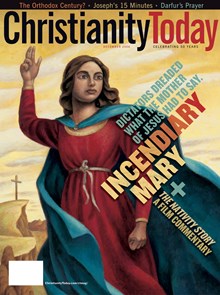 This article is from the December 2006 print issue. Subscribe to continue reading.