Whatever happened to the idea of rescuing people from hell?
Robertson McQuilkinJuly 1, 2006
This article is from the July 2006 issue. Subscribers can read all of CT's digital archives.

The official representative from Saddleback Church had just finished his powerful presentation of Rick Warren's P.E.A.C.E. plan. Afterwards, I told him that I use The Purpose-Driven Church in a doctoral-level course, and also how much I appreciate Warren's impact on the church. But when I mentioned the critical omission of missions in the book, this rep grinned in agreement. That's why he and I welcomed the P.E.A.C.E. plan (CT, October 2005, p. 32), which outlines a holistic approach to the church's responsibility to the world, conquering the "giants" of poverty, illness, and ignorance. The plan is marketed as a wholly new paradigm for doing missions.

Warren's well intended, helpful, and increasingly popular approach, however, is not fundamentally new. It tackles the Great Commission with methods that have been wending their way through the evangelical missionary movement for at least two decades: using (1) short-term teams and money via (2) church-to-church ministry (the local church "here" partnering with a local church "there"). Let's look at them before we examine an equally troubling theological shift.

1. Short-term teams and money. This "new" approach to doing the evangelistic part of missions began to emerge in the 1970s, especially with Calvary Chapel and other megachurches. And it has been wildly successful, at least in terms of raw statistics. While the number of long-term missionaries from North America has stayed basically static, the number of American laity involved in short-term projects grew from 22,000 in 1979 to more than a million today.

Of course, the appeal is irresistible for a generation wanting personal involvement now in something significant, but which does not require a long-term ... 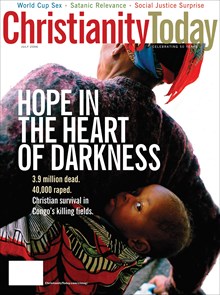 This article is from the July 2006 print issue. Subscribe to continue reading.