If Flyboys was Top Gun with biplanes and trench warfare, then The Guardian is Top Gun with diving gear and big waves. Once again, a cocky young hotshot joins a military academy—in this case, a training school for the U.S. Coast Guard Rescue Swimmers—and once again, the eager young braggart learns more than he expected, as he butts heads with his teachers and experiences a tragedy or two, all of which turn him into a better, more mature, more professional kind of person.

However, unlike some films in this genre, The Guardian is just as interested in the teachers as it is in the students—at least where Ben Randall (Kevin Costner) is concerned. Ordinarily, Randall would be out at sea saving lives, not coaching a bunch of trainees; he is a hero among rescue swimmers, a legend who has saved countless people. But his very dedication to his job drives a wedge between Randall and his wife (Sela Ward), and so one day he comes home to find that she is leaving him. And then he loses his best friend, and several others, in a tragic accident at sea. So his commanding officer (Clancy Brown) reassigns him to the school, hoping that time away from the emergency calls will give him a chance to deal with his losses.

And that's where Randall meets the aptly-named Jake Fischer (Ashton Kutcher), the former high-school swimming champ who, not realizing that Randall is one of his teachers, makes a point of introducing himself to the school by announcing that he's going to break Randall's records. And so begins a battle of wills between the two men, as Randall pushes Fischer and his classmates to their limits, while Fischer does all he can to show that he can meet and surpass Randall's expectations—at least when it comes to ... 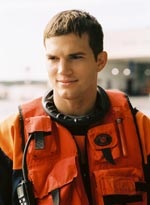