New talent quickly comes and goes in the music business, but here are twelve new Christian artists that we hope to see continue for years to come.
Compiled by Andy Argyrakis, Christa Banister, Russ Breimeier, and Andree Farias|January 1, 2007

Another year has come and gone, bringing with it a long list of new Christian artists vying for the public's attention. Like the contestants on American Idol, some are bound to remain obscure, while others seem to have what it takes to connect with audiences for the long haul. Listed alphabetically, here are twelve talented bands and solo artists who made their national debut in 2006 that we hope to see continue for many years to come.

For a while, it looked like this national debut from Circleslide would never release. We're glad it finally did, though we all agree that the band doesn't exactly reinvent the wheel with their songwriting, which often treads into familiar worship-rock territory—think By the Tree or Ten Shekel Shirt. But Circleslide compensates with an appealingly polished modern rock sound, the soaring vocal of Gabe Martinez, anthemic choruses ("Get Up"), and some occasionally progressive arrangements ("Meteor"). No, they don't really resemble The Choir, the '80s alternative rock band from which they derive their name. But given time, Circleslide could well pick up where bands like PFR and Paul Colman Trio left off, continuing with vertically focused pop/rock that's undeniably catchy.

Click here for the original review.
View the artist page.

If Third Day had continued in the direction of their harder-edged Conspiracy No. 5 from 1997, they might have ended up with something similar to this powerhouse national debut from DecembeRadio. With so many of today's bands trying to develop a fresh rock sound based on grunge, emo, punk, and hardcore, it's nice to finally find one firmly rooted in the classic Southern rock of Lynyrd ... 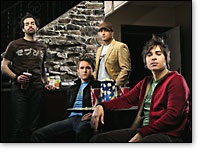