A New Day in Vietnam

How a little NGO is helping Christians gain more freedom in a country still plagued by human-rights abuses.
Mark GalliMay 4, 2007
This article is from the May 2007 issue. Subscribers can read all of CT's digital archives.

The sun was setting as our small bus bumped along a Vietnamese highway. Then someone began to sing. We were in the middle of a four-hour drive between Buon Me Thuot and Pleiku, having just endured a day of formal meetings with government and church officials, meetings as necessary and exhausting as tilling a garden that has been long neglected.

The singer was our guide, Hoang Cong Thuy, secretary general of the Vietnam-usa Society, an organization with close ties to both the Vietnamese Communist Party and the government. The cliché "he is a small man with a big heart" was invented, I'm sure, after someone met "Mr. Thuy" (as he is called). Unfailingly cheerful, even though he had to endure the quirks of eight evangelical pastors, three businessmen, one nonprofit diplomat, and one skeptical journalist, he worked to keep our spirits up. So during our drive, he grabbed the microphone of our little bus and began belting out a Sinatra tune. A cappella.

It was a joyful noise, as one is wont to say about earnest musical efforts. And it inspired equally modest talents on the bus to join in. One of our party—a man in his retirement years—gave a rendition of Elvis, followed by a bold fellow crooning from the repertoire of the Monkees. Then the Vietnamese sang their national anthem, and we followed with ours.

As Amy Rowe, one of the intrepid travelers, wrote in her blog, "It doesn't get any weirder than Baptists and Communists singing karaoke together in a van driving through the middle of Vietnam."

Yes, but weird stuff like this is at the heart of religious freedom efforts in Vietnam. It is the sort of thing that is making a difference for Christians there.

I went to Vietnam in late August and early September ...

A New Day in Vietnam

A New Day in Vietnam
expand
hide this 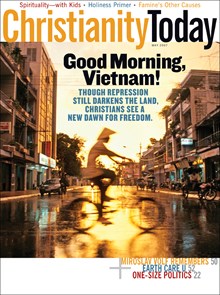 This article is from the May 2007 print issue. Subscribe to continue reading.