Day Zero is a film that might have resonated more a year or two ago. It's a gloom-and-doom, "Iraq is the next Vietnam" type of protest film—and in light of the recent decreases in violence and troop numbers in Iraq, it seems rather overstated. Perhaps the rapidly deteriorating urgency of Day Zero is one reason why it is being released on DVD February 26, just one month after its theatrical release. But even if it wasn't so ill-timed or anticlimactic, Zero still cannot escape from the clichés and dramatic missteps that have plagued nearly all the might-have-been Iraq dramas of the last couple years. 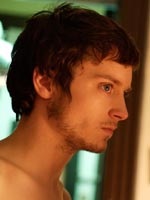 The setup of Zero has a lot of potential. It is the not-too-distant future, and the war on terrorism has expanded in Iraq and elsewhere, on the heels of a catastrophic terror attack in Los Angeles that killed 1400. Apparently out of necessity (though the legislative logistics are never described), the selective service draft is reinstated. The draft age is increased to include young men up to age 35, and thousands of apolitical young Millenials are sent letters informing them of their draft status.

Zero, directed by newcomer Bryan Gunnar Cole, follows three friends in New York City who have each received the dreaded letter, instructing them to report for duty in thirty days—on "day zero." Elijah Wood plays Feller, a skinny hipster-ish author with an iBook and a lot of insecurity. Chris Klein is George, a blueblood white-collar yuppie bound and determined to ignore his draft card. Jon Bernthal portrays Dixon, a flag-waving cabbie with a short temper and a from-the-streets toughness. The film follows the three of them as they come to terms with the reality that their lives, as they know them, will change forever when they report for duty.

One of the major flaws of Zero is its overwritten script. Almost all of the film is dialogue and voiced exposition—the characters tell us what they are feeling, rather than show us. This is a shame, because certainly the prospect of being drafted—plucked out of civilian life and sent off to war—is profound fodder for compelling, subtle drama. So much about the dread these men feel could have been conveyed silently, in isolation, in mannerism. Instead, Rob Malakani's script forces them to do and say things in broad, overwrought strokes. Feller conveniently meets with a psychiatrist to express his feelings, and the three of them have periodic pow-wows over beer or pot to discuss their respective existential dilemmas. A typical interchange might find George making some generalized anti-war statement ("The whole thing is so wrong … We're making new enemies everyday, and it's a war we can't win") and Dixon providing an alternative view ("We're in a fight for freedom—for our way of life").

More egregious is the way that Feller, George, and Dixon are reduced to such pithy stereotypes and stock characters. It is totally unbelievable, for example, that this "slice of life" threesome would be such a tight-knit group of buddies. Feller is a drug-addled, Camus-reading hippie from a bad family, whereas George is a silver spoon ex-jock with a trophy wife and nice condo. And Dixon is a softhearted patriot Republican with season tickets to the Yankees. What, you will wonder, do these three guys have in common? The answer is nothing—apart from the fact that they provide a poor film with a little diversity of perspective and conveniently contrasting character arcs. 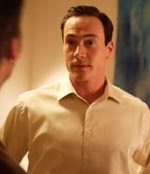 A better course for this film would probably have been to focus on one person more deeply, rather than three caricatures superficially. Sadly it has become something of an arthouse/indie stereotype to have a cross-section ensemble cast, and if Day Zero could be characterized as anything, it could certainly be labeled "arthouse/indie wannabe." As such, a condescending air of imposed artsy gravitas is endemic to the film. There is very little distinct style at work here, but what is present (jerky handheld camerawork, periodic blue or green filters) screams "faux-indie." Whether it is saccharine dialogue ("I'll wait for you") or shock-value imagery (a newly tattooed, skinhead Elijah Wood smashing his iBook into the wall), everything in Zero comes across as heavy-handed and artificial.

Despite all of its faults, Zero is at least a film with an interesting question at its heart: how should we respond when our life's course is crudely interrupted by some force outside our control? The urge in this film is toward existential angst—a refusal to cede control of one's life trajectory for the sake of something like civic duty or nationalism. But a film like this can also inspire interesting thoughts about personal autonomy and choice. And, for a Christian, it evokes some elements of God's sovereignty in our lives. We may not want to be conscripted into an army to fight a dangerous war, but perhaps we should remember 1 Corinthians 6:19-20: "You are not your own, you were bought at a price."

The fear and dread that is overplayed in Zero can, however, be framed more positively, and has been in several recent films. I'm thinking of something like Sophie Scholl, the German film about a vibrant young college student who gives up a promising future to fight for what can only be a fatal cause. Other films like The New World or even Atonement portray young people meeting misfortune and unjust life-alterations with bravery and humility. I also think of 25th Hour, another "last moments of freedom" type film that finds its protagonist (Edward Norton) facing imminent loss of a self-directed existence with despair and angst but, ultimately, a resolution to peace.

Day Zero is a film that portrays the event of being drafted as a worst-case scenario. For the three main characters in the film, day zero more or less means death. It's a film that revels in defeatism and hyperbolized dystopia (similar to something like 2006's Death of a President)—a would-be political statement that is more insipid than insightful.

Day Zero is rated R for language, sexual content, some violence and drug use. It is definitely not a film for families. In addition to a rather uneasy subject matter (young men getting drafted to go to war), the film contains quite a bit of profanity, drug use, and some violence. There are also scenes in a gay bar and with female prostitutes, though without nudity.