We probably need another Rambo movie like a hole in the head … or arm, or chest, or neck, or … But then, the relatively young audience that saw Rambo No. 4 with me seemed to enjoy it. (I'll get back to them in a bit.)

No one's confusing the Rambo films with high art, but the first two are still classic entries in the "one-man-army" action genre. And though the franchise has remained dormant for 20 years, Sylvester Stallone's characterization remains one of the most iconic in film history. The name is practically synonymous with G.I. Joe. (Anyone else remember the '80s action figures and cartoons? Sing along now: "Rambo … the force of freedom!")

What brings an aging action hero out of such lengthy retirement (besides the potential for big bucks)? Stallone was open to a sequel when offered the opportunity, provided that the story was meaningful. Like something involving human rights, genocide, and missionaries? Yeah right, in a Rambo movie? The popular actor/writer/director hinted at it when he talked to us about Rocky Balboa, and he's remained true to his word. 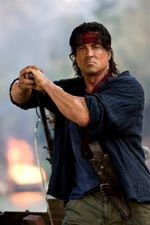 Filmed in Thailand, Rambo indeed takes place 20 years after the last film. The aging, world-weary Vietnam vet has secluded himself from civilization, fishing and selling poisonous snakes at a small village while running a longboat service on the Salween River. A group of missionaries from Colorado (New Life? Focus on the Family?) locates Rambo to charter his service. Their destination is Burma (aka Myanmar), bringing medical supplies and Bibles to the persecuted Christians there.

Rambo is naturally reluctant. The Burmese-Karen conflict is the world's longest running civil war—60 years and counting. As the prologue to the movie notes, poor Christian farmers are often the target of extermination. The missionaries would be entering a war zone. Nevertheless, Sarah (Julie Benz of TV's Buffy the Vampire Slayer and Dexter), one of the group's leaders, insists that it's not a foolhardy effort: "Trying to save a life isn't wasting your life." That's apparently enough to change Rambo's mind, proceeding to take them up river to their destination.

Two weeks later, another stranger comes knocking on Rambo's hut. It's the pastor from the Colorado church. The missionaries have gone missing, and according to reports from freedom fighters, they're still alive, but held captive by the Burmese army. However, the embassies won't get involved in such a hot spot. So the church has raised money to hire mercenaries—bringing new meaning to the term "mega-church." Rambo is asked to lead the team into Burma to locate and rescue the missionaries. Feeling some degree of responsibility—and with 45 minutes still remaining in the film—the legendary soldier accepts. 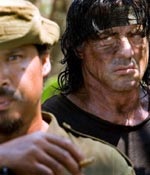 Rambo the fourth has two kinds of violence in it, neither of them something you want to see if you're considering overseas mission work. I can't emphasize enough how graphic this movie is.

The first is the more disturbing kind, yet ironically the more "acceptable." I'm talking about movies like Schindler's List and Hotel Rwanda, which realistically show the persecuted enduring unimaginable suffering. I personally feel some obligation in seeing such films, as they raise awareness of real events going on in the world—things that we can work toward ending as both Christians and Americans.

Stallone clearly didn't want to shy away from the horrors of genocide in Burma, pushing the film's envelope well past anything that Hotel Rwanda left out. The soldiers' favorite "game" in Rambo is to throw landmines into rice fields, forcing captives to run relays back and forth while placing bets on which will be the first/last to die. In the film's most sickening scene, the Burmese army slaughters the village where the missionaries are serving. Children are shot or thrown into flaming buildings, women are raped, limbs are dismembered, bodies are ripped to shreds from explosions—virtually no survivors, and it's all absolutely horrible to behold. But then, such violence is part of the real story in real life in Burma/Myanmar, so one could say this film is merely reporting the truth.

Julie Benz as Sarah, one of the missionaries

The second half of the movie shifts gears to the rescue story in which Rambo and his cohorts exact bloody vengeance upon those who cause injustice. Now we're entering territory where violence is glorified, railroaded into wanting Rambo to kill the bad guys—and we want them killed in the worst way possible. Which of course he does, and this is by far the bloodiest of all the Rambo movies. Not just because of the horrors of the Burmese-Karen conflict, but because sniper bullets cause heads to explode like watermelons and Rambo unloads a machinegun cannon into soldiers at point blank range. Yeesh, take that!

Action hounds are likely to be pleased. There are some stupid moments, but Rambo is not an overly bad movie. It does take nearly half the running time to wind up the action, then lets it loose non-stop for the remainder. As bloody and intense as the movie is, most of the carnage is computer-generated and has some measure of fakeness to it, enough to frustrate some fans of the genre. And Stallone provides more presence than acting, which is probably true (to lesser extent) of the previous films. Here he's mostly relegated to thousand-mile stares and stealthy action, but it's still a kick to see ole Rambo back in action. The best staged sequence involves a frenzied footrace-against-time to lead soldiers off the trail and into an unexpected trap—wonderfully done.

Such is the interesting and complicated dichotomy of this final installment in the Rambo franchise (and I'm not giving anything away with that when your star is 61). Stallone and company primarily deserve credit for making an action movie that's not just violent for the sake of violence. There's purpose to showing the madness, even if it's hard to watch and quite literally overkill.

He's also done well here portraying Christians in a mostly positive light. The single exception is Sarah's fiancée Michael (perpetual TV guest star Paul Schulze), who comes across as ridiculously sanctimonious, initially treating Rambo like dirt and chastising him even after he saves their lives early on—yet even he redeems himself by the end through his actions.

Aside from him, we see a group of believers willing to enter one of the world's worst hellholes to do the Lord's work, offering medical assistance and preaching the gospel—you don't see that in an action movie every day! And while the atrocities are terrible, you can't help but think of people like Martin and Gracia Burnham in the Philippines or the South Korean missionaries murdered last year by the Taliban—or any other stories of missionary martyrdom and persecution. Movies like this help beg the question: Are believers foolish to enter such dangerous territory, or is God indeed calling us to serve in such conditions?

My problem with Rambo is that there's no place given for such consideration. No flag-waving speech to champion such heroes or the need to put an end to it. It steers you one way, then drops the moralizing for thrills; they never quite converge. I suspect most action fans will interpret the movie as a modern equivalent to Rambo saving a busload of nuns and orphans—campy instead of consequential.

I got my answer leaving the theater, overhearing the moviegoers (aged 18-40) excitably recount their highlights: "Wow, did you see the way Rambo ripped that guy's throat out?!?! That was awesome when he stabbed the soldier and eviscerated him!!! I loved the way Stallone shot that arrow through the guy's head!!!"

Sounds like filmgoers got what they wanted, but did they get more than they expected? Talk about mixed movie messages—I fear the more important part of the movie gets buried in the bloodshed. You could say that Rambo shoots himself in the foot.

Rambo is rated R for strong graphic bloody violence, sexual assaults, grisly images and language. I can't emphasize the R rating enough. There's all manner of profanity, and plenty of strong graphic bloody violence, sexual assaults, and grisly images to show the horrifying conditions in Burma. Christians (including children in some instances) are shot, hacked to pieces, blown apart, and/or burned. Women are raped—more implied than graphic, but enough to give you the idea. Later, Rambo arrives with guns and arrows, using a machine-gun cannon to mow down an army at point blank range, ripping out a guy's throat with his bare hands and eviscerating another. This one's not for kids or the squeamish or anyone unprepared to watch reenactments of horrific violence.

1 of 4
Sylvester Stallone as John RamboOne bad guy is about to experience a wee bit of painJulie Benz as Sarah, one of the missionariesSly Stallone, snake handler extraordinaire