Sounding more jubilant than he has in years, Springsteen celebrates love and marriage—and, subtly, the God behind it—in Working on a Dream.
Mark Moring|February 17, 2009

Springsteen's last few records—The Rising (2002), Devils & Dust (2006), and Magic (2007)—had dabs of delight, but the projects also included darkness aplenty … and not just on the edge of town. The Rising was mostly a soul-stirring response to the events of 9/11, and while there were hints of hope and healing, that was also about the time that Springsteen, who'd long kept his political views to himself, started speaking out against the Bush administration. (He later became a vocal supporter of John Kerry and then Barack Obama in the last two elections.). Devils & Dust was in part a war protest album, rife with themes as bleak as its title. And Magic was more of the same, expressing Springsteen's disillusionment with the state of American society and policies.

We Shall Overcome: The Seeger Sessions (2006) was more hopeful, but a) the songs weren't his, and b) as is typical of folk music, optimism shone in spite of, rather than because of, the cultural climate.

So when Springsteen, halfway through Working on a Dream, sings a pop/candy number like "This Life" with all the giddy charm of the 60s-era Beach Boys—complete with la-la-la harmonies—and means it, you get the feeling he's decided to move on.

Yes he can. Meet the new Boss. He really does seem to be as happy as the guy who hammed it up for the world at the Super Bowl's halftime party.

It's ironic that Dream was essentially birthed by the moody Magic. "What Love Can Do"—which Springsteen describes as a "love in the time of Bush" meditation—was ... 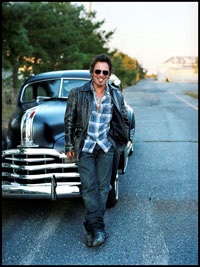