The actors do their best with a half-baked script in this comedy about a "spiritual" self-help author who is as clueless as his readers.
Peter T. Chattaway|July 24, 2009
Our Rating

Guess what: the guys who write self-help books are people too. That's right, the people who say they've found the answers to life's Big Questions are just as clueless as the rest of us. Well, okay, perhaps not quite as clueless as all that; after all, they have figured out a way to make a fortune writing books and giving speeches, whereas the rest of us must take their books out of the library or, if we're feeling especially extravagant, buy their books for ourselves. But isn't it comforting to know that they have problems of their own, too?

That, in a nutshell, is the very obvious premise behind The Answer Man, a comedy of sorts about a reclusive self-help author who must come to terms with the fact that he doesn't really know what he's talking about. And he's not just any self-help author: Arlen Faber (Jeff Daniels) is the author of a bestselling book called Me and God whose agent (Nora Dunn), in an opening scene, emphatically declares that Arlen has been touched by the divine. We then cut to Arlen at home, swearing profusely as a courier interrupts his meditation. And so the lofty, spiritual guy has been brought down to our mundane level. Are we laughing yet?

Curiously, despite the fact that Arlen's book is nearing its 20th anniversary—and despite the fact that it has led to countless spin-offs such as Me and God for Teens and The Me and God Diet—Arlen himself remains an enigma to the general public. Apparently his book became hot stuff without him ever doing an interview or any sort of publicity tour; no one even knows what he looks like, and so the courier (Tony Hale) is reduced to trying to figure out whether the guy who accepts his packages is Arlen himself or merely his assistant.

Given how much Arlen hates ... 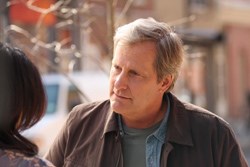