He says he's renounced the faith he grew up with, but Sam Beam's music—including his latest—is infused with religious imagery and spiritual longings.
Joel Hartse|June 16, 2009

But if I make the Pearly Gates / I'll do my best to make a drawing / of God and Lucifer, a boy and girl / An angel kissin' on a sinner.
—from "Trapeze Swinger"

Sam Beam, who records under the name Iron and Wine, has released three full-length albums and three EPs (including one in collaboration with the band Calexico) for Sub Pop Records since 2002, during which time he has risen from being an intriguing oddity to a respected, important and, ultimately, famous songwriter, whose music can be heard everywhere from Skittles commercials to movie soundtracks (most recently Twilight).

The first Iron and Wine album, 2002's The Creek Drank the Cradle, was startling in its modesty, a collection of hushed home recordings, guitars and banjos as whisper-quiet as Beam's own multitracked vocals. To listen to Creek is to eavesdrop on private moments of a family's life: a soon-to-be-parted couple's day at the beach, a son leaving home, a mother's grief. Its follow-up, 2004's Our Endless Numbered Days, was similarly intimate, though more slickly produced, and caught a number of the ears with its plaintive opening prayer, "On Your Wings," a song that pleads, "God, give us love in the time that we have." Mortality and faith run throughout the record, to the final title track, which tells of a woman who has "chosen to believe in the hymns her mother sings."

Beam himself remarked to Pitchforkmedia.com in 2002 that he made a decision to leave behind the Christian religion he was raised with: "That was a big step, I mean, just saying, 'You know, I'm not going to believe that any more.'" Yet the language of Christianity remains present in his music; his 2007 LP The Shepherd's Dog, which was supposed to be a "political" album, took oblique shots ... 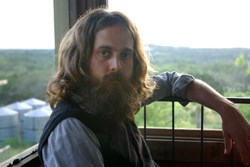