The protagonist has carried a cross all over the world, and has the powerful stories to prove it—but this documentary fails to do him justice.
Annie Young Frisbie|March 27, 2009
Our Rating

The numbers are staggering. 315 nations visited. 38,000 miles walked. 76 million steps putting over 16 billion pounds of weight on the feet of one Arthur Blessitt, the man who carried a cross 1.5 times around the world. "This wood," he says, caressing a pitted, dented, darkened beam, "is my friend."

The Cross, directed by Matthew Crouch, gives Blessitt a platform with which to tell his story in his own words. Perhaps the plural "stories" is more accurate, because it's as if even Blessitt himself can't grasp the enormity of his endeavor. His mission from God, which began 40 years ago, can only be expressed through the thousands of people whom Blessitt encountered, each of whom made a lasting impression on his heart. 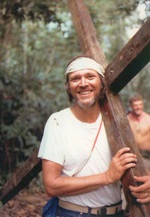 The protagonist is engaging, but the film is not

As a fresh-faced, hopelessly conservative young man, Blessitt heard about the burgeoning hippie movement and headed straight to Southern California to win hearts for Christ. He began passing out tracts and preaching the gospel in Griffith Park, where his sincerity led him to be dubbed "The Minister of Sunset Strip."

Blessitt built a vibrant ministry reaching out to the poor, the disenfranchised, and the criminal, but in 1968 everything changed, when he says God told him to pick up a cross—a physical cross—and carry it to the ends of the earth. Puzzled but amazed, he accepted the call, only to suffer a near-fatal aneurysm shortly thereafter. In the hospital, he was told that he should refrain from physical activity, so he figured he would have to give up his task. But then he had a profound realization: "The circumstances don't alter the call." Off he went.

The Cross opens by following Blessitt through New York City's Union Square, as he drags his cross (it's wheeled, to save on wear and tear) up to various denizens. We see no hostile encounters. Many are mildly indifferent. Some, however respond to Blessitt with an openness that's almost embarrassing. One such encounter with a hardened man ends with the sinner's prayer. After the "amen," Blessitt holds the gaze of this new convert, tracing the tattoo of a crucifix the man has emblazoned on his arm, connecting the two crosses in a physical sign of God's sovereignty. 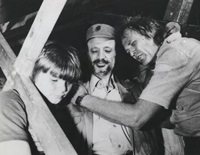 Crouch includes a few more conversion moments, and they're among the most powerful in the film. Blessitt is charismatic, warm and approachable, the cross towering over him, lending him an air of vulnerability. He's bound and determined to share the love of Christ with every single person he encounters, be they beggar or world leader.

As a person, Blessitt is captivating. He leaps off the screen. But as a movie, The Cross suffers under a lack of structure. It's a formless mass that fawns over Blessitt's stories and fails to give them a proper setting. At a certain point, Blessitt's tales become so much noise, which the filmmakers even acknowledge, creating a montage scene comprised only of tantalizing snippets of bigger stories.

The film is dominated by Blessitt's voice. Occasionally, we hear someone give a response, but invariably their voices are muted, softened, no match in volume or intensity to the prophet himself. As counterpoint, Crouch offers up himself, in a clumsy voiceover where he tells the audience that he made the movie to find out what makes Blessitt tick. Crouch fails to recognize that his personal interest in Blessitt, however fascinating he may be, is simply not enough to justify a film, unless the purpose of the film is purely promotional.

On the road again

In the midst of his wanderings, Blessitt found the time to father six kids with his first wife and one with his second. At no point does Crouch show the effect of Blessitt's ministry on his family, even when handed a silver-platter opportunity. Slipped into the beginning of one of his anecdotes is the startling revelation that he brought one of his sons, Joshua, with him on his trip to then war-torn Beirut. He and his son were held at gunpoint and threatened with their lives, only to bravely stare down the soldiers and gain audience with Yasir Arafat himself. News footage shows Blessitt praying with Arafat, a sight stripped of its shock value by the image of youthful Joshua. The story raises so many questions, none of which are even glanced upon by Crouch—the son of Trinity Broadcasting Network founders Paul and Jan Crouch and the CEO of Gener8Xion Entertainment. Crouch had produced several films (One Night with the King, Megiddo: The Omega Code 2, Carman: The Champion), but this was his first full-length film as director.

Because Crouch avoids any deep questioning of Blessitt, and fails to bring in any other voices, The Cross lacks structure. While Blessitt is appealing, once the novelty of his walk wears off, there's nothing left for audiences to sink their teeth into. Crouch piles up Blessitt-story after Blessitt-story, but never finds The Story. It's just a mess. If the purpose was to lionize Blessitt, then mission accomplished. However, if the purpose was to impress upon viewers the magnitude and depth of Blessitt's service, then sadly, The Cross falls far too short.

To see if the film is playing near you, click here.

The Cross is rated PG for thematic material, some violent images, and mild language including drug references. Blessitt's stories contain some mention of violence and drug abuse, but none is seen onscreen.

1 of 3
The protagonist is engaging, but the film is notBlessitt and son Joshua with Yasir ArafatOn the road again