A witty, enjoyable comedy about a young man working for a magician with a waning career while learning about the nature of fame.
Alissa Wilkinson|March 20, 2009
Our Rating

A dozen years ago, Tom Hanks's production company, Playtone Records, released a film called That Thing You Do. It was quirky, witty, and a lot of fun—light, refreshing cinema with a good message about priorities and loyalty.

Even though That Thing You Do is about a fictional rock band, I couldn't stop thinking about it while I watched The Great Buck Howard—also a Playtone production. It has the same sprightly feel, the same good-natured attitude toward people's foibles, and a similarly moralist feel without any preachiness.

The Great Buck Howard stars John Malkovich as the eponymous fading has-been diva magician—excuse me, mentalist—who is touring the country performing in small-town theaters, and Colin Hanks as Troy, an aimless but nice enough law-school dropout who accidentally lands a job as his road assistant while trying to break into the entertainment industry.

Buck is capricious, but a born showman, and standing in the wings watching his show each night, Troy warms to the man. With his face-splitting grin, penchant for slightly mismatched suits, over-vigorous handshake, and signature exclamation—"I love this town!"—Buck can be a bit cheesy. He has a bad temper and a highly inflated view of his own importance—stemming from some formerly famous friends and a past as a celebrity—that is as maddening as it is sad. But he has one illusion that Troy can't figure out, and it works every time: he can locate a hidden bill—part of his appearance fee—that has been hidden by the audience in the auditorium.

Buck's career was once much hotter, with multiple appearances on Johnny Carson, and he's on a quest to restore his former glory by performing a daring feat: hypnotizing an entire room of people to sleep, while the press stands by and presumably sends rapt reports back to their home offices. He calls in his publicity contingent to rally the journalists, and the PR people send the young Valerie Brennan (a vivacious Emily Blunt), who is unimpressed by Buck but hits it off with Troy. Buck is equally unimpressed by Valerie; Troy, on the other hand, is a little mesmerized.

After his feat is astonishingly successful, Buck's career actually begins to take off. He becomes a household name once again and enjoys a return to something approaching his former glory. He even gets the opportunity to be on the show of Johnny Carson's successor and Buck's nemesis—Jay Leno—and here, Buck is thrust rudely into reality. Seeing the waning of his life and career ahead, Buck must make some decisions.

Meanwhile, Troy is having his own crisis of identity through his relationship with Valerie and his father (played by his actual father, Tom Hanks), who wants him to go back to law school.

What makes The Great Buck Howard engaging is all we get is Troy's point of view. Troy isn't sure what to make of the enigmatic Buck, and we aren't really, either. The finer points of Buck's ego, weaknesses, and genuine talents reveal themselves gradually. He doesn't explain himself, so we slowly get to know the man through his reactions and eccentricities.

This first-person view feels very authentic and is easily explained: writer/director Sean McGinley toured with The Amazing Kreskin, whose blog recently stated that: 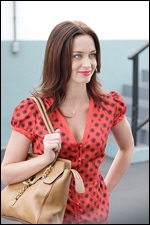 "There is only one person in the entire world who can be called:
The Real Mentalist
The Real Buck Howard
and that person is none other than
The Amazing Kreskin!"

Because of this, the film also bears some striking similarities to The Devil Wears Prada, with a big name actor (Malkovich, instead of Streep) as the capricious boss who is scrambling to hang on to their career, the protagonist as the beleaguered assistant who grudgingly grows to appreciate the genius of their superior, and Emily Blunt as a hard-working foil in both films.

The film's script, with a lesser cast, could have been fabulously maudlin or just plain dull, but each actor is well placed (particularly Malkovich and Blunt). There's a great attention to detail as well—minor characters are well cast (Ricky Jay and Steve Zahn make appearances)—and the film's look is whimsical without being fantastical.

This is the kind of movie where there are morals to the story, and they can be summarized as follows: Don't let anyone decide what you'll do with your life for you. Don't judge people too quickly. Be patient. Don't think too highly of yourself.

It's a genuinely enjoyable movie—not an action flick, or a riotous comedy, or a sappy romance, or even a thoughtful coming-of-age drama. Light, witty, and occasionally thoughtful, The Great Buck Howard is a good Saturday-afternoon popcorn flick for teens and adults.

The Great Buck Howard is rated PG for some language including suggestive remarks, and a drug reference. A sexual relationship between Troy and Valerie is implied. Bad language is thrown around at times. Troy deceives his father. Depending on your family's view of illusions and magic, the inexplicability of Buck's more fantastical acts could be objectionable.