If you've seen any of the trailers, then you'll probably have a good idea what to expect from the first hour or so of Knowing, the latest mind-bending bit of speculative fiction from Alex Proyas (Dark City, I Robot). But even that first hour has its surprises, and after that, the film veers in directions that go far beyond anything you might have expected—directions that will be all the more awe-inspiring the less you know going into the theater.

Don't worry, though, this review shall not divulge the movie's deeper secrets. And thankfully, there is still a fair bit to chew on even without those later revelations, so let's dig in.

The story begins in 1959, with a teacher asking her class to draw some pictures of the future for a time capsule that will be opened in 50 years. However, one of the students, Lucinda Embry (Lara Robinson), does not draw a picture; instead, she scribbles out a series of numbers, and she still has a few digits to go when the teacher snatches the paper out of her hand. The movie then jumps ahead to 2009 and introduces us to astrophysicist John Koestler (Nicolas Cage) and his young son Caleb (Chandler Canterbury), the latter of whom is given Lucinda's mysterious paper when the time capsule is opened right on schedule.

John dismisses the paper at first, but something about the numbers catches his eye—a little too easily, perhaps—and within minutes he realizes that the paper seems to predict not only the date of the 9/11 terrorist attacks, but also how many people were killed. John then Googles the other numbers and discovers that Lucinda's paper seems to predict all the major disasters, both natural and man-made, that have taken place over the past 50 years. And, uh-oh, the paper also indicates that there are three more disasters yet to come.

This poses a bit of a worldview crisis for John, who was earlier seen discussing the subject of "randomness" versus "determinism" with one of his classes. Is it purely random that the Earth happens to be the exact distance from the Sun that it needs to be in order for life to grow and thrive here? Or is it a sign of some sort of deeper, grander design (and if so, whose)? Some might argue that these questions would be more appropriate to a philosophy class than a science class, perse, but the students ask John what he believes anyway, and he replies that life has "no grand purpose," adding, sadly: "I think s--- just happens."

So what is he to make of this seemingly prophetic paper, scrawled out by a little girl half a century ago? Does it show evidence of an underlying order, even when that order expresses itself in the form of sudden death for tens or hundreds or thousands of people at a time? And is it significant in any way that John's own wife died in one of these disasters a few years earlier, or that John no longer believes in heaven like his son does?

Those who remember M. Night Shyamalan's Signs might be thinking that this scenario, of a widowed father who has lost his faith but is now confronted with evidence of a deeper meaning to this life, sounds awfully familiar. And they would not be far wrong—especially when we learn that, while John himself was never a pastor, it turns out that he is the son of a pastor. And that is only one of the curiously spiritual hints that the movie drops along the way; at the ceremony where the time capsule is hoisted out of the ground, the secular school choir sings, of all things, "This little light of mine, I'm going to let it shine." 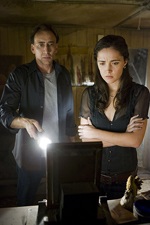 Diana (Rose Byrne) tries to help John figure it all out

Meanwhile, John tries to figure out what to do about the numbers—and about the eerie, pale-faced, blonde-haired men in dark clothes who have begun lurking outside his house and giving smooth black stones to his son Caleb. Fearing for his son's life, John tracks down Lucinda's daughter Diana (Rose Byrne) and granddaughter Abby (Lara Robinson again) in a bid to see if they can shed any light on the late Lucinda's prophecies: what they mean, where they came from, and whether there are any more of them out there.

Along the way, Proyas, with help from Simon Duggan's brooding cinematography and Marco Beltrami's urgent music, proves himself to be a master of suspenseful, engaging and sometimes brutal cinematic technique. The remaining disasters unfold in a truly harrowing fashion: one involves a crashed plane and is depicted with a seemingly single hand-held shot that rivals anything in Children of Men, while the other puts the camera right behind the window of an out-of-control subway car as it smashes through innocent bystanders. And those, it seems, are just the warm-up acts for an even bigger catastrophe down the road.

And yet, even when Proyas takes the movie in a truly grandiose and even cosmic direction, he never loses sight of the human element—and full credit has to go to Cage (who has been known to slip into self-parody all too easily in other, ostensibly serious films) for giving his role here just the right degree of dramatic weight. A climactic scene between John and Caleb is especially devastating, as father and son confront an outcome that is, at once, both arbitrary and inevitable, both a result of their own free will and something that has been forced upon them for reasons that they simply do not understand.

Seeking answers amid the wreckage

Beyond that, there is not much that one can say about Knowing and its deeper spiritual or biblical implications without giving things away. So for now, let us simply note that the company which officially owns the copyright on this movie is called Ezekiel Films, and that one of the screenwriters is Stuart Hazeldine, a Christian who is also attached to Scott Derrickson's upcoming adaptation of Paradise Lost. (Hazeldine's name does not appear on-screen, but it is on the poster at the movie's official website.)

This is not to say that Knowing is a "Christian" film, per se; indeed, to the extent that we take the movie literally—to the extent that we experience the world within the story on its own terms, as any of the characters would experience it—we can safely say that the movie deviates in some ways from a biblical understanding of the concepts that it invokes. But like some of the more interesting parables, the film takes our expectations and rattles them around a bit, confirming some and disturbing others, and for some viewers it may be just the sort of thing that can tease us into active thought about what we believe and why.

Knowing is rated PG-13 for disaster sequences (including planes, trains and automobiles crashing into people and other vehicles), disturbing images (people and animals on fire) and brief strong language (a few four-letter words).