This year's Super Bowl broadcast featured one highly touted, heavily technical special effect—and I'm not talking about Bruce Springsteen's slide into the camera. TV spots leading up to the big game urged viewers to stop by their local grocery store and pick up a special pair of 3-D glasses, in order to view what was said to be the world's first 3-D television commercial, to be played some time during the game. It was a curious mix of the hi-tech and the lo-fi; as far as 3-D imaging has apparently come, you still need to obtain a pair of cheap, flimsy glasses in order for it to work at all. 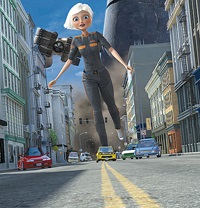 In much the same way, the entire concept of a 3-D movie strikes one as being somehow futuristic and retro at the same time; as cutting-edge as the technology may be, it's hard to divorce it from images of the Golden Age of the B movie, when a pair of red-and-blue-tinted, cardboard spectacles were worn in order to see a zombie's hand or a flying saucer pop off the screen in whatever the week's serial adventure movie happened to be. One presumes that the visual gimmickry was largely designed to distract one's senses from the storytelling, which may have been just as flimsy as the 3-D glasses.

But back to that Super Bowl commercial: It was for a new animated film called Monsters vs. Aliens, one of just a handful of recent films to be presented in 3-D. And alas, for whatever old-school vibes the 3-D goggles might convey or vintage B-movie frivolity the title might suggest, the film is decidedly and unashamedly the product of modern-day trends in family movie-making. Which is to say: There are poop jokes. There are pop culture references. And there's not much in the way of storytelling or characterization.

The alien robot has hostile intentions

The movie comes from DreamWorks—the studio that fared well last year with the popular Kung Fu Panda. That movie was good, if not Pixar-level great, but Monsters vs. Aliens finds itself several rungs down the ladder of quality. I could sum up this whole muddled affair by saying that it's about a tenth as creative and entertaining and lasting as, say, Monsters, Inc.—one of the lesser Pixar movies!—and that it doesn't reach the same heights as DreamWorks' previous monster franchise, Shrek.

I'll also say that this project might have been something pretty cool, had it been developed by Pixar, or even the folks who did Panda. One imagines that the premise—alien invaders swoop down to take over our planet, and our only hope is to unleash a group of monsters that the U.S. government has captured and hidden from the public over the years—would prove rife for playful homage and subversion in different hands; the potential to toy with B-movie conventions seems rich with possibilities, both for humor and for good storytelling, two things that are in short supply here.

Instead, Monsters vs. Aliens takes the lowest-common-denominator route of family entertainment—in most respects, anyway. Rather than focus on developing a good story, the film uses its so-so plot as a vessel for weak, Saturday morning cartoon antics, an occasional crass or anatomical joke, and references aplenty to other movies and pop culture tropes (including everything from an E.T. name-drop to a reference to An Inconvenient Truth—which is, admittedly, really funny).

And rather than develop memorable characters, the film reduces its players to one-note gags. B.O.B., an amorphous blob, is dumb and likes to eat things; all the humor surrounding him stems from some variation on these two traits. Dr. Cockroach is a mad scientist, half-man and half-bug, and his jokes mostly involve his maniacal, evil laugh, while his contributions to the story all revolve around him constructing some elaborate machinery. And so on.

The voice casting is exceedingly funny and very clever, but also indicative of some of the movie's larger problems. The characters are matched to actors to whose real-life personas they bear some ironic resemblance; thus, the mad scientist is matched to Dr. House himself, Hugh Laurie, while the American president is voiced by Stephen Colbert. The actors are all very good—especially Seth Rogen as the good-natured but mindless blob, Will Arnett as the evolutionary "missing link," and Kiefer Sutherland, hamming it up as a military guy (of course) who sounds like he escaped from Dr. Strangelove—but this kind of casting illuminates the film's chief flaw: That it is concerned with being clever and culturally aware, above all else.

General W.R. Monger and the President

The actors are good enough that they make us care about some of the characters—particularly Arnett's Link—even if we don't remember them for very long after the end credits roll. Indeed, the movie has enough redeeming scenes—a "prologue" sequence at the beginning shows us how one character, Susan (voiced by Reese Witherspoon), first turns into a monster, and it opens up the door for some decent character development and life lessons learned down the road; meanwhile, a comedic action sequence on the Golden Gate Bridge is both very funny and modestly thrilling, while all of Colbert's lines are amusing enough—silly in a sometimes-appealing way. But it's not a particularly meaningful or even interesting movie, beyond its value as a Saturday matinee that kids may somewhat enjoy and parents will tolerate.

As for the 3-D effects: They're occasionally fun, but surprisingly lacking in any invention or excitement, popping up mostly during action scenes or as we hurtle through space. At the screening I attended, the biggest awestruck gasp from the audience came when the opening titles appeared onscreen, in all their 3-D glory—but a minute or so later, we all grew accustomed to the effects and the gimmick lost its power to distract us from the movie we were watching—which, alas, could use a good diversion.

Monsters vs. Aliens is rated PG for some sci-fi action scenes, crude humor, and mild language. The action scenes are all very cartoony and harmless, but some of the dialogue is disappointing; there are jokes about bodily functions and at least one mention of a woman's "boobies"—played for laughs, but not especially funny.