With Derek Webb's announcement of a battle over his newest album, some may applaud his apparent stand for the right to swear. But is it really worth the fight?
Todd Hertz|May 13, 2009

Yesterday, Derek Webb sent an e-mail to fans revealing an internal battle over his next album, Stockholm Syndrome, originally scheduled for release next week. He said that he is now unsure when it will see the light of day because of a disagreement with his label, INO Records. He says:

"They've been very supportive over the years, but … it seems I've finally found the line beyond which my label can support me, and apparently I've crossed it. I consider this my most important record and am adamant about all of you hearing it. … The majority of the controversy is surrounding one song, which I consider to be among the most important songs on the record."

A representative for INO told me today that "INO has a wonderful relationship with Derek and expect everything to work out and release as planned [later this year]. However, in regards to the e-mail from Derek, they presently have no comment."

Since the e-mail arrived in inboxes, there's been internet speculation that the disagreement is a matter of a record label's censorship over swear words. In fact, Patrolmag.com suggests that based on the name of Webb's yet-unlaunched activism website, this fight may be over the s-word. Just based on these uncomfirmed theories, some fans are applauding Webb for standing up for his art and his freedom of speech. That reaction has made me think about Christian artists, freedom of expression, and profanity in bigger terms.

We don't know anything about the details of this issue. It may have nothing to do with profanity. It may be about themes that INO is uncomfortable with. But if this issue truly hinges on using a cuss word, it is good fodder for a relevant faith and ... 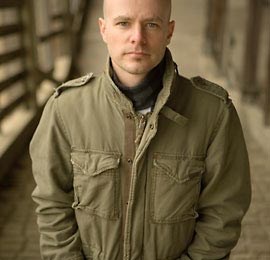