Based on a true story, this is a surprisingly moving and inspirational tale of Christian compassion, self-discovery, and hope.
Brandon Fibbs|November 20, 2009
Our Rating

Inspired by author Michael Lewis' best-selling true story, The Blind Side is not the film you might expect judging solely from the previews and marketing. Bearing the burden of being potentially schmaltzy, the film instead threads an almost impossible needle, pulling off a surprisingly moving and inspirational story of compassion, self-discovery and hope.

Michael Oher (Quinton Aaron) has never slept in a real bed a single night in his life. Over-sized and under-educated, Michael is one of eight children, each of whom was fathered by a different man. His mother, a drug addict, drifts between Nashville streets and ramshackle low income housing projects. It is only a matter of time before Michael is also hopelessly entrapped.

Fate intervenes when Michael's uncle shows his nephew off to the football coach (Ray McKinnon) of a local, well-heeled, private school. Though untested, the coach sees potential in Michael, if for no other reason than he would be the largest thing on two legs to step foot on the field. The school board is not inclined to give Michael a scholarship; after all, the boy's grades are abysmal. But the coach contends that they have a sacred duty to let Michael in. "Last I checked," he argues, "our sign had the word 'Christian' on it. We either take that seriously or we paint over it."

Be it a self-serving argument or a pure expression of belief, his argument works and soon Michael is admitted, the lone African-American student in a sea of wealthy, white faces. What school administrators do no know is the extent of Michael's poverty—he has only two pairs of clothes, the second set of which he carries around in a plastic grocery bag. He has begun secretly sleeping in the gymnasium, feeding himself on bags of ... 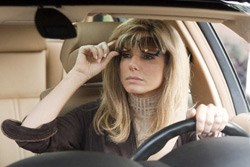