In this latest adaptation of a Roald Dahl story, stop-motion proves a natural fit for an iconic director making his animation debut.
Tim Avery|November 25, 2009
Our Rating

It's hard to begin a review of a Wes Anderson film without using the word "auteur." From his debut film Bottle Rocket (1996) onward, Anderson has established a style that is clearly his own: tracking and slow-motion shots, montages, classic rock songs (often played over the montages or slow-motion shots), wry humor, immaculate production design, the Futura Bold font—and so on. He also returns to many of the same themes, like family dysfunction and identity crises. If an auteur is defined as a director "whose complete control over all aspects of a production gives the end result a recognizable feel," Anderson fits the label as well as anyone.

Anderson's newest film, Fantastic Mr. Fox, is an adaptation of a children's book by the oft-adapted Roald Dahl (Charlie and the Chocolate Factory, James and the Giant Peach, Matilda). Fantastic Mr. Fox represents Anderson's first attempt at an animated film—more specifically, stop-action animation, with real-life models painstakingly photographed one frame at a time. My biggest question going into this film was how Anderson's distinctive style would translate from live action to this new medium.

When asked by the Chicago Sun-Times about using stop-motion, Anderson said, "With stop-motion over other forms of animation, I think you can sense that somebody's moving these physical objects and making them seem alive. You can somehow sense the hands being put on these things, and there's a charm to that, I think." This awareness of "the hands" is especially true in Fantastic Mr. Fox, because the character models wear real fur. As the animators re-position the models between frames, the bristles in the models' fur get pushed around, creating in the final product an effect known as ... 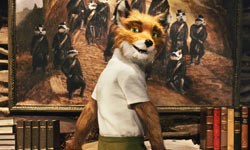