Adapting a beloved, Pulitzer prize-winning, Oprah-endorsed bestselling book to the screen is never an easy feat. But such was the immense job tasked to John Hillcoat (The Proposition), director of the movie version of Cormac McCarthy's The Road, out in theaters tomorrow. A relatively unknown talent from Australia but something of a kindred spirit to McCarthy, Hillcoat approached The Road with great reverence, and the result is impressively faithful to the book.

CT movies critic Brett McCracken recently sat down with Hillcoat in Los Angeles to discuss the look of the film, its spirituality, and what it means to "carry the fire."

Your last film, The Proposition, seems to share some of the same tone and spirit as The Road. Both explore dark, bleak, apocalyptic depths. Do you see a correspondence between the two films?

The Proposition was actually inspired by Cormac McCarthy's Blood Meridian, or at least very influenced by it. I had the idea for an Australian western for a long time, but that book was a huge influence. In both The Proposition and The Road, the landscape is sort of primeval and ancient, which becomes a metaphor that I like. It creates such pressure for the characters that tests them all the time. It becomes almost like a third character. That's what I love about McCarthy's writing. And if you've ever been to the Australian outback, it really is like some ancient, primeval land.

The land is so crucial to The Road. How did you go from the book—which imagines this post-apocalyptic landscape—to the film, which has to visualize it?

The key there was to bring out the familiarity. So rather than a complete fantasy of the future, I wanted to try to embed it into our own deep memory in some way, because that's ... 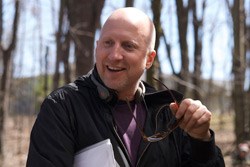