When CBS approached Martha Williamson to produce "a show about angels," she saw an opportunity to transform people's perceptions of angels from that of a novelty to a spiritual reality. During its nine-year run, from 1994-2003, Touched by an Angel was the top-rated show on CBS and earned multiple award nominations, from the Golden Globes to the GLAAD Media Awards. Looking back, she says the show's unflinching portrayal of faith "forced a spiritual conversation" that is still taking place on network television.

Last week, CBS DVD and Paramount Home Entertainment released two best-of DVDs, centered on the themes of "Hope" and "Holiday." Each disc features four episodes, along with new introductions by Williamson that speak to the episode's themes and recall her production memories.

Williamson spoke with Christianity Today about the show's portrayal of faith, its impact, and its legacy.

Why do you think people are so drawn to this idea of angels walking among us?

I think that angels do walk among us, and if you have a sense of that, you want somebody to tell you that you're not crazy. There's a saying that each of us has a God-shaped void, and when someone finally understands that space in your heart was made for God to dwell, then it's a great relief. With Touched by an Angel, we always tried to make it about God. We never said it was a show about angels; the angels are there to point us to God.

People want to know that God is there. I have met atheists who simply decided to become atheists because they didn't want to be disappointed. The show received hundreds of thousands of letters over nine years, and people didn't write to the angels as much as they wrote to the message. They said, "Whoever's writing this message, please keep ... 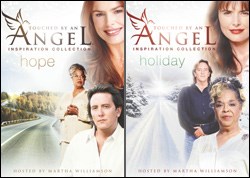