Stylish but shallow film attempts but fails to deal with the age-old question: What is God?
Alissa Wilkinson|November 12, 2009
Our Rating 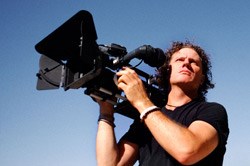