Are you a solo artist or is Jaymes Reunion a band?

Cameron Jaymes: I started my career as a singer/songwriter, and then over time, had a bunch of guys play in my backing band. When we started recording the album, I may have been the vision caster, but the rest of the guys really brought it alive. In a lot of senses, it's a combination of me as the writer and a full band collaboration where they're equally a part of what I do.

What inspired the Reunion part of the name?

Jaymes: It really felt like a family reunion every time we would hang out and play since we became such good friends. But I'm the personality and I steer the ship as much as anybody can in a band.

What songwriters inspired you most?

Jaymes: My publishing company says I'm like an updated Paul McCartney if he wasn't in the Beatles, was only 24 years old, and wasn't influenced by John Lennon. I hate to compare myself to Paul McCartney, but he's my hero musically. I'm also very influenced by Stevie Wonder on the soul side and my writing also has a lot of James Taylor-isms.

Why did you sign with BEC when you had interest from Epic and Columbia?

Isn't this a stretch for the primarily alternative BEC/Tooth & Nail roster?

Jaymes: BEC and Tooth & Nail [sister companies] really know how to stick with a artist, and even if it's going tough, they grind it out. The record is about life and all aspects of it, but we're Christians and some of those undertones apply. BEC and Tooth & Nail have a real street credibility, and for a pop record, that's really important.

I hear you support something called Mocha Club.

Jaymes: I wanted to be involved in a faith-based initiative and the Mocha Club is great at spreading a relevant message to people outside of the faith as well. The message ... 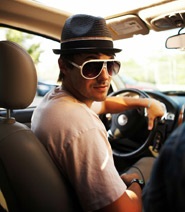