Michael Moore uses the occasion of our financial crisis to decry capitalism, but his argument is muddled and his alternative nebulous.
Tim Avery|October 2, 2009
Our Rating

By now we all know that if Michael Moore makes a film called Capitalism: A Love Story, he's going to play the third wheel. The documentary filmmaker revealed his liberal leanings in his feature film debut, Roger & Me (1989), which stood up for the blue-collar workers abandoned by General Motors in Moore's hometown of Flint, Michigan. Since then Moore has established himself as a spokesman of the Left, fighting for gun control (Bowling for Columbine) and against the Bush administration (Fahrenheit 9/11), and, in his last film, attempting to expose the woes of the American healthcare system (Sicko).

In Capitalism, Moore circles back to Roger & Me's theme of corporate greed. Only this time he sets his sights on not just a company, but—in the context of the recent financial crisis—our entire economic system. It's an ambitious target and, as it turns out, rather elusive for Moore.

"If you wish to converse with me," said the French philosopher Voltaire, "define your terms." I imagine that Moore might feel some kinship with Voltaire—think of the satirical bent and progressive stance—but in Capitalism his standard for conversation is lower. The film's most frustrating aspect is Moore's sloppy use of terms—namely, "capitalism" and "democracy."

He assumes we know what capitalism is. Indeed, heargues that our country's history is "a love story" with capitalism, as Americans have let themselves be force-fed an affection for its fundamental principles. To illustrate this, he shows clips fromcheesy 1950s education films that fawn overfree markets and private ownership. But Moore's definition of capitalism (narrated over images of abandoned homes and businesses across the country) is a little different: "a system ... 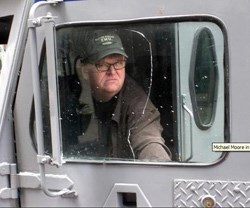