When father and son Lenny and Daniel Smith sent out their first email announcing the launch of Great Comfort Records, they announced an ambitious goal: they hoped to "completely change the course of the old gospel ship."

"Gospel" here refers to music—praise/worship/devotional/etc.—and Lenny Smith says "it doesn't take a whole lot to change the direction of the ship. You just have to turn the rudder."

The Smiths seem an apt crew to pilot such a vessel, as their ventures, though relatively small, have been wide-ranging in their creativity and vision. Daniel has made forward-thinking (sometimes bizarre, always creative) music for years with his band (and family) the Danielson Famile, and Lenny, Daniel's father, wrote the classic worship song "Our God Reigns" (a modest tune that was a favorite of Pope John Paul II) and other worship songs during his 30-year career as a carpenter.

While some people like to gripe about stale praise choruses and misguided approximations of worldly "coolness" in worship songs, the Smiths do not gripe. Instead, they get back to the rudder. Both have made not only art, but also business at the fringes of mainstream Christian music: Daniel helms the record label Sounds Familyre, which releases albums by his own band (and by Lenny) as well as groups like Soul-Junk, Half-handed Cloud, and Sufjan Stevens. Meanwhile, Lenny runs New Jerusalem Publishing, a company which publishes and licenses songs by Sounds Familyre (and other) artists.

In early 2009 the Smiths decided to christen a new venture: Great Comfort Records, a record label devoted exclusively to worship music with an independent business model, which is run by Daniel and his wife, Elin, and Lenny and his wife, Marian. 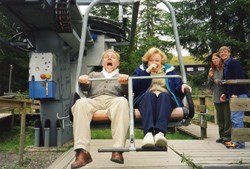