In a world where nobody has ever lied, a screenwriter discovers the advantages of modifying the truth—and it's not the attack on religion that some have made it out to be.
Frederica Mathewes-Green|October 2, 2009
Our Rating

What would it be like to live in a world without lying? I expected the universe depicted in The Invention of Lying to present a reverse image of the Jim Carrey comedy Liar Liar, in which the main character finds himself uncomfortably compelled to tell the truth. I expected, that is, one more brash, noisy, agitated film, replete with insults and gross-out jokes. I wasn't expecting the sweetness in this film, its quietness and thoughtful core. It feels, in spirit, more like a fable, in the mold of mid-century films like It's a Wonderful Life or Miracle on 34th Street.

I just wish it were better. I wish the early promise didn't grow gradually thinner and less authentic—less true.

You could imagine a world without lying taking any number of forms. Screenwriters and directors Ricky Gervais (who also stars) and Matthew Robinson give us a world where people not only speak the absolute truth, but also have no internal controls to restrain blurting of uncomfortable and hurtful thoughts. At a restaurant, the hostess looks at gorgeous Jennifer and says, "Hi, I'm threatened by you." The waiter tells Mark and Jennifer, "I'm very embarrassed that I work here." And Jennifer is completely, devastatingly upfront with Mark over dinner: "You're overweight, you have a pug nose, and no job. You're not good enough for me," she says, with the blank honesty of a child and not a bit of (intentional) cruelty.

There are plenty of good laughs in the opening sequences as we get to observe what such an unadorned world would be like. Coke's slogan is "It's very famous." Pepsi's slogan is, "When they don't have Coke." A newspaper is named "Printed Publication" and a nursing home is "A Sad Place for Hopeless Old People." Movies consist of big-star ... 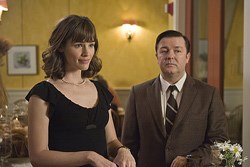