The first-ever John Paul II International Film Festival, inviting filmmakers of all stripes, brings a message of "faith through the storm" to Miami.
Steven Greydanus|October 27, 2009

A brand new film festival this week in Miami includes many titles that would be at home at, say, the Creation Film Festival or the Heartland Film Festival. There's The Boy in the Striped Pajamas, a moral parable about the friendship of two boys on opposite sides of a Nazi camp fence. Bandslam, a Walden/Summit musical-comedy-romance. Bella, an award-winning tale about a crisis pregnancy produced by Catholics but popular with Christians of all stripes.

But there's also The 13th Day, a stylish Catholic-produced British indie about the 1917 Marian apparitions and "miracle of the sun" at Fatima, Portugal. And Duska, a documentary about Wanda Poltawska, a survivor of the Nazi Ravensbrück camp and a lifelong confidante of Karol Wojtyla—later Pope John Paul II. Poltawska experienced a medically inexplicable recovery from cancer after then-Bishop Wojtyla wrote to ask the prayers of Padre Pio, a stigmatic priest (now a canonized Catholic saint) credited with a supernatural gift of healing.

The John Paul II International Film Festival, beginning Thursday and running through November 7, aspires to be a festival with a difference. Its organizers—social worker Rafael Anrrich, actress Laura Alvarado, and filmmaker Frank William Brennan—are committed Catholics, and quotations from Pope John Paul II's 1999 Letter to Artists pepper their website and their conversation. But they point to the late pope's ecumenical appeal to Protestants—and his interreligious outreach to Jews and Muslims—as their inspiration for reaching out to filmmakers and audiences outside the Catholic fold.

Anrich, Alvarado and Brennan recently spoke to CT Movies about their fledgling fest. Their mood was buoyant and positive—though ... 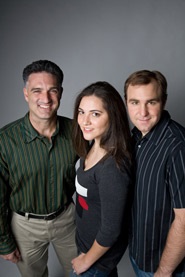